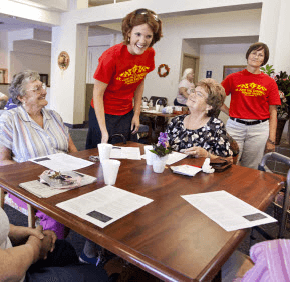 CATONSVILLE – Sonny Harvey is a regular figure at dragon boat practice, but not on the water. A resident at Catholic Charities of Baltimore’s DePaul House Senior Housing in Catonsville, Harvey, 75, goes weekly to the Inner Harbor to watch the rowers prepare for the 2012 Catholic Charities Dragon Biennial Boat Races, which will be held Sept. 8.

“There’s a lot of energy that people don’t realize they have in themselves until they get into something like that,” observed Harvey, who attended Holy Trinity in Glen Burnie before moving to DePaul House four years ago.

Harvey is cheering for St. John the Evangelist in Severna Park – not because it is the only parish team racing this year, which it is, but because as a DePaul House resident, it is his team.

Each race year, Catholic Charities partners its teams with its charitable programs. The teams are encouraged to raise funds for their partner programs and involve them in race day, where they’ll compete in long, Chinese-style boats.

St. John the Evangelist is paired with DePaul House, which opened in 1983 as part of the Jenkins Senior Living Community and has 109 rent-assisted apartments for elderly and disabled residents.

DePaul House resident Fran Stewart, 92, has a special connection to the team – her daughter Anne Pershall, 50, is on it.

Partnering with DePaul House “gave me a personal stake in it,” Pershall said. “Then you can actually see what you’re doing and where the money’s going.”

A first grade teacher, Pershall wrote an e-mail to her students’ parents explaining the Dragon Boat Races and her link to DePaul House. One girl sent a donation for “Mrs. Pershall’s mommy.”

Next door to DePaul House, St. Joachim House residents are also cheering on a dragon boat team – Sun Trust, which has partnered with the senior living community for several years. Residents embellished the team’s ceremonial race day hat and will host the team for a potluck meal this fall.

Resident Phillip Clarke, 69, plans to spend all day at the races, as he has in the past, he said. He brings his binoculars to follow the races closely and hopes to carry the team’s flag, he said.

As for St. Joachim House, “The best day of my life was when I moved in here,” Clarke said.

On each 45-foot-long dragon boat: