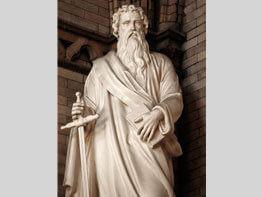 WASHINGTON – St. Paul was a Jew. An evangelist for Christ, yes. But always a Jew. His writings tell us so.

“That’s the hard thing for us (to understand),” said Jesuit Father Thomas Stegman, a biblical scholar who is associate professor of New Testament at Boston College’s School of Theology and Ministry. “Paul was raised a Jew. He was a pious Jew and Pharisee before his encounter with the risen Christ. Ask Paul, ‘Who are you?’ and he responds, ‘I’m a Jew.’ He believed that Jesus was the Messiah, that he was the one who was sent to fulfill the promises.”

Time and again, Father Stegman said, Paul’s writings point to his Jewish heritage and his Jewish practices. In his Letter to the Romans he talks about the pain he feels when his Jewish brothers and sisters are not following the Gospel, and in Galatians he calls on the language of Jeremiah and Isaiah to explain how he was called to be a prophet to the gentiles. In 2 Corinthians he writes that five times he received “40 lashes minus one” from the Jewish authorities, who were prohibited from punishing gentiles in the same way.

Paul’s belief that Christ was the promised savior of the Jewish people also makes him Christian, Father Stegman explained, but not in the way Christians are perceived today.

Such discoveries from Scripture come as a result of the work of biblical scholars who explore the word of God through the historical, cultural and literary contexts into which the words are placed.

The appreciation for Paul’s Jewish heritage and the fact that he remained strongly connected to that birthright stems not only from his letters but also from research extending beyond Scripture to ancient writings and historical texts uncovered by historians and biblical scholars over the centuries.

“One of the challenges that excites our students is that Scripture didn’t just drop from the sky, and (they must get) to know something about the first-century world … to know about the communities in which the writings developed and appreciate the different literary forms,” Father Stegman said.

Paul’s writings are among the most studied works by biblical scholars of the last quarter-century, said Sheila McGinn, professor of biblical studies and early Christianity at John Carroll University in suburban Cleveland. The result, she explained, has led to a better understanding of some of the early church communities.

“People are realizing about all the authors of the New Testament that the people we call Christians didn’t exist as Christians,” she said. “There was no such thing as Christianity from their point of view in the first century.

“We use Christianity for that group of Jews, but the kind of Christianity we see today didn’t exist,” she explained.

Conclusions about the early days of the church by scholars such as Ms. McGinn, Father Stegman and their colleagues are not mere speculation, but are based on painstaking research by generations of biblical experts. Utilizing what is called the historical-critical method of studying the 73 books of the Catholic Bible – Old Testament and New Testament alike – scholars have been able to unravel quite a bit of the story of salvation history.

“For a Catholic it’s important (to understand the Bible) because it’s the word of God and it’s been consigned to writing,” said Marianist Father George Montague, professor of biblical theology at St. Mary’s University in San Antonio, explaining the work of Catholic biblical scholarship. “Even for people who are not Christian it’s important to understand the impact the Bible has had on the world culture, especially in terms of the dignity of the human person.”

“The idea is to figure out what these people are trying to tell us,” Father Montague said.

And what God is trying to say, said Jesuit Father Richard Clifford, professor of Old Testament and dean of Boston College’s School of Theology and Ministry.

“I think (Scripture) is the word of God and God wants to communicate with us,” he explained. “He’s a communicating God and wants to be heard and responded to.

“The Bible is very accurate, but it’s not a modern-day history book,” Father Clifford added. “We have to work on hints. There’s so little factual material.”

Some answers to those hints also can be found in other fields of study: history, anthropology, geography. As new discoveries in those fields are made, they help unravel biblical mysteries as well as raise new questions about the word of God.

St. Agnes Sister Dianne Bergant, professor of Old Testament studies at the Catholic Theological Union in Chicago, said the work of interpreting the Bible should not fall just to scholars and educators, however, because everyone has a role.

“I always tell my students everybody interprets the Bible,” she said. “If all you do is pick it up and read the Bible, you are interpreting.”