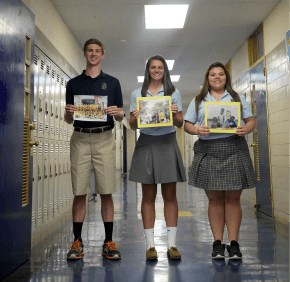 “On the final day, when we said our goodbyes, he told me in Creole that he loved me,” remembered the 17-year-old senior at the Hagerstown school. “Driving away, I looked at him and realized that that might be the last time I see him. I didn’t know a single 5-year-old could touch my life just as much as I’ve touched his.”

Katrina is one of several students at St. Maria Goretti whose lives have changed after venturing far outside their community to give of themselves on international mission trips to Haiti and other developing nations.

Two years ago, Meghan Lynch, now an 18-year-old graduating senior, traveled to Haiti with nearby St. Ann Parish as part of the archdiocese’s Baltimore’s Haiti Solidarity Project. Inspired by Lynch’s experiences, Katrina and Amber DeSantis, now an 18-year-old senior, went to Haiti last year with the same parish group. This summer, four other students will return to the nation that shares an island with the Dominican Republic.

For years, the entire student body has participated in a Lenten fundraiser to support special projects at St. Maria Goretti Elementary School in Haute Feuille, Haiti. Their efforts have resulted in the erection of a new well, a playground and more at what they affectionately refer to as “Little Goretti.”

“Communication was the biggest challenge,” said DeSantis, who taught Bible classes while in Haiti. “We re-enacted different Bible stories and communicated through playing and acting out.”

DeSantis, who has also participated in a mission trip to Ecuador, said she learned a bit of Creole during the Haiti trip and taught some English.

Adam Fisher, a 16-year-old junior, last year visited a mountainous region of Guatemala, about five hours outside Guatemala City, to assist in planting mango and banana trees and tomato plants while on a mission trip coordinated by a Mennonite church. The idea was to improve nutrition by diversifying crops beyond corn.

“We also cut down many trees to use as lumber to help build their new lodging center and classrooms,” he said. “We got to play soccer with the kids and it was a great way to use sports to connect the two of us who had nothing in common.”

During an April 17 afternoon assembly, several Goretti students gave presentations on their trips to countries such as Haiti and Honduras. They included Noreen Malik, a 17-year-old senior who traveled to Peru on a mission trip. Fellow students participated in game show-style quizzes about developing nations.

Katrina told the Catholic Review she strongly encourages her peers to go on mission trips to see for themselves the poverty that exists in the world and to learn from others.

“So many people have so little,” she said, “while we take things for granted. We spend so much money on prom dresses and everything like that. We need to realize that they’d be happy if they get a pair of shoes.”