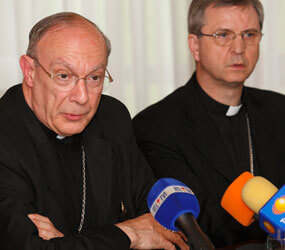 VATICAN CITY – The bishops of Belgium asked forgiveness of victims of priestly sexual abuse and promised wide-ranging steps to curb the problem in the future.

In a pastoral letter addressed to the faithful May 19, the bishops said one of the causes of the sexual abuse problem was the way authority is exercised in the church, an issue they said requires an “examination of conscience.”

The bishops said they had erred in not taking the problem of abuse seriously enough.

“Abusers were given a second chance, while the victims carried in their flesh the wounds that cannot heal, or can barely heal,” they said.

The bishops issued the letter shortly after returning from Rome, where they held extensive talks with Pope Benedict XVI and top Vatican officials. They said they had the pope’s support in undertaking “concrete measures” against abuse, including:

– Strict application of new criteria for the selection of candidates for the priesthood.

– A more effective plan of supervision and accompaniment of all pastoral agents.

– A code of behavior whenever church personnel deal with children.

The bishops said the problem of sexual abuse was not limited to the failings of individuals. It also touches the question of authority in the church, they said.

“This is why the church should undertake an examination of conscience aimed at changing the forms of exercise of authority that can lead to abuse of power over minors. This will require courage and humility, especially by bishops and others responsible for the church community,” they said.

In April, Belgian Bishop Roger Vangheluwe of Brugge resigned after admitting that he had sexually abused a minor, who was also his nephew. In their letter, the bishops said that disclosure had shocked Belgian Catholics and “seriously undermined” their trust in pastors.