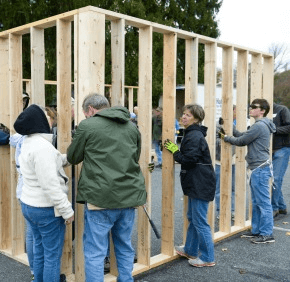 “I think it’s just amazing,” said parishioner Betty Hunter, who coordinated the “panel-build” for Habitat for Humanity Susquehanna. “So many times, you have to coerce people to do things, but all these people joyfully volunteered.”

In less than two hours, the carpenters – many of them parishioners of St. Margaret – assembled all the exterior wall panels for the second floor of a single-family home to be built in Elkton.

They also loved the longtime parishioner to whom the project, “The House that Joe Hughes Built” was dedicated.

“Joe was just one of those welcoming, easygoing guys who made people feel so welcome in the parish,” Hunter said.

Hughes, who died in December 2015 at 75, was a school counselor who became deeply involved with Habitat for Humanity after his retirement, serving on the organization’s board, helping to select families to be served, fundraising and maintaining relationships with area churches.

“He was always bugging St. Margaret’s to support a build,” said his daughter, Kristin Short, who made the trip from Manhattan, where she is a parishioner of Holy Name of Jesus, to participate.

She said Hughes would have been “more than thrilled” to see St. Margaret taking such a significant role for a cause “in which he believed so much.”

“This was Joe’s dream; this was his wish,” concurred Germaine Hughes, his widow. “If he saw this today he would be elated.”

For the future homeowner, the whole affair was nothing short of an answered prayer.

“I can honestly say God has truly been involved since the beginning,” said Mary Hines, a pharmacy administrative assistant at Union Hospital in Elkton.

She will live in the home with her daughter, Malia, 7, and her son, Malakai, 11.

Karen Blandford, executive director of Habitat for Humanity Susquehanna, which serves Harford and Cecil counties, says her organization typically builds eight houses per year for affordable homeownership and assists another 50 households in preserving their homes.

“This year, we will build our 100th house,” she said proudly.

Clients have both a limited income and sound credit; Blandford said her organization works with some families to help them fix credit issues.

If you add it all up, it means all their free time for three or four months,” Blandford said.

However, friends and family may help with up to 150 hours, she said, and some families, including Hines’, are awarded hours for their children’s high academic performance.

“We just think they’re important,” Blandford said. “It builds skills; it builds confidence; it builds community because they meet their neighbors; and it builds pride in homeownership.”

Blandford expressed gratitude for the dozens of volunteers at St. Margaret, noting that a similar job at the actual build site would have taken much longer with the typical five or six volunteers.

Furthermore, she said, the panel gave volunteers “a taste.”

“A lot of people have asked if they can sign up to work on a site now,” she said.

According to John Moore, a board member and core volunteer, there were plenty of candidates.

“They really did great,” he said. “We’ve done a lot of these panel builds, and with this one there were very few nails that had to be pulled out. For a large group, that’s wonderful.”

“In the three months I’ve been here, I’ve experienced just an outpouring of Christian goodness,” he said.

When the panels were completed, they were temporarily connected to each other to ensure fit, and all the volunteers gathered inside the frame while Monsignor Schenning blessed it.