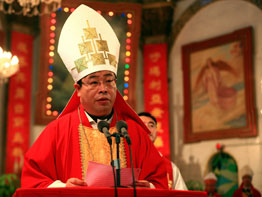 ROME – The bishop of Beijing said he hopes Pope Benedict XVI will visit China in view of the country’s improved relations with the Vatican.

In response, the Vatican said it was premature to talk about a papal trip to China, but it called the bishop’s remarks a “positive and encouraging” sign.

Bishop Joseph Li Shan, who was named to head the Diocese of Beijing last year with government and papal approval, made his comments in an interview Aug. 20 with the Italian state television, RAI.

“We strongly hope that Benedict XVI will make a visit to China. This is a great desire, and we have hoped for a long time that it will happen,” Bishop Li said.

“Relations with the Vatican are constantly improving. One can say there are important developments,” he said.

Jesuit Father Federico Lombardi, the Vatican spokesman, told Vatican Radio Aug. 21 that Bishop Li’s comments could be considered a response to the pope’s expressed desire for a normalization of China-Vatican relations.

“For now, to speak about a trip by the pope to China is completely premature,” Father Lombardi said.

“However, the words of Bishop Li Shan show that all Chinese Catholics love and respect the pope, recognize his authority and would be happy to meet him, and this is certainly a very positive and encouraging aspect,” he said.

Asked about the current state of Vatican-China relations, Father Lombardi said “various important problems are unresolved,” but that the Vatican intends to keep promoting a “sincere and constructive dialogue.”

Bishop Li estimated there were between 8 million and 10 million Catholics in China. He said that in Beijing, there were about 20 churches celebrating three or four Masses on Sunday, with about 3,000 Catholics in attendance at each one.

A commentary published Aug. 19 in the Vatican newspaper, L’Osservatore Romano, said China’s hosting of this year’s Olympics could mark the beginning of a new chapter in international relations.

It expressed the hope that, in its approach to China, Europe and the rest of the world would move from an attitude of fear toward engagement and dialogue.

On China’s part, it added, this would require “progress on the path of human rights, an area in which the country still seems to suffer a structural deficit, and on the path to democracy and substantial freedom.”

Such reforms may take longer than the West wants, but the important thing is that they take place, the commentary said.