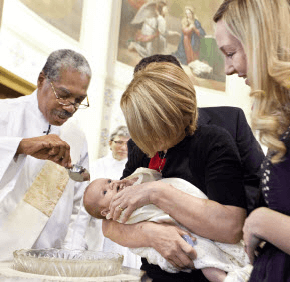 In a city where the population has declined for decades, there is good news from the Catholic Community of South Baltimore, which has more baptisms than funerals.

Holy Cross, Our Lady of Good Counsel and St. Mary, Star of the Sea, the parishes that comprise the Catholic Community of South Baltimore in Federal Hill, have collectively seen an increase in the number of baptisms since 2009, said Dorris van Gaal, their director of faith formation.

Of those 37 baptisms, 10 were in October alone, said Father Patrick M. Carrion, pastor of the Catholic Community of South Baltimore.

Most parents who have their infants baptized at the Catholic Community of South Baltimore are parishioners, though “it’s not a requirement,” Father Carrion said. Baptisms are done before, during or after Masses.

“We treat baptisms like weddings,” Father Carrion said. “What day do you want it? We’ll do our best.”

While some families in the past were reluctant to join group baptisms, now “they (families) like that aspect, having the community there,” said van Gaal, who added first-time parents must take a baptism preparation class.

“There’s more to baptism than just preparation for the sacrament,” van Gaal said. “We emphasize that they can come to church (with infants), it’s OK. You’re probably more annoyed with a crying baby than we are. The younger you take them, the more they get used to what’s going on.”

Holy Cross parishioners Joanne Campbell-Avendt and her husband, Ray Avendt, had their son Joseph baptized Nov. 4 at the parish.

“They were very accommodating toward us,” said Campbell-Avendt, 30, a Federal Hill resident. “I actually had relatives over from Ireland and we were able to organize it all very quickly.”

While there’s no shortage of Catholic churches in Baltimore, “it is kind of nice that this small community is right on our doorstep,” Campbell-Avendt said. “Father Patrick, he tends to remember your name and that’s nice.”

Catholic Community of South Baltimore parishes, located on residential streets, welcome parishioners and the community, from weekly children’s play groups to Scouting and neighborhood association meetings held in one of the parish halls, Father Carrion said.

“They know where we are because of these things,” said Father Carrion, who noted that the Catholic Community of South Baltimore mails postcards to new neighbors each month, letting them know the parishes are there.

He also cites South Baltimore’s rejuvenation – from Under Armour’s ongoing expansion in Tide Point to the new mixed-use development at McHenry Row to the Ritz-Carlton on the Inner Harbor – as how his part of the city has attracted younger generations.

“You look out there (in the congregation) and see a lot of families,” Father Carrion said.

“It’s getting younger,” she said.