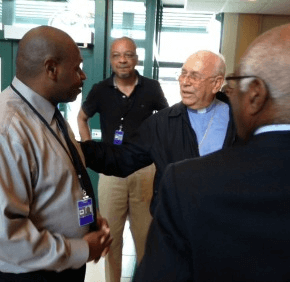 By Paul McMullen
pmcmullen@CatholicReview.org
Twitter: @ReviewMcMullen
Two months to the day before news broke that Cuba and the United States would normalize diplomatic relations, the Archdiocese of Baltimore played host to a visiting prelate from the Caribbean island nation.
That exchange was followed by a grant of an unspecified amount from Baltimore to a feeding program in the Diocese of Pinar del Rio, resuming a connection that dates back at least to 1997.
In simultaneous news conferences Dec. 17, President Barack Obama in Washington, D.C., and Cuban President Raul Castro in Havana announced that the two countries would re-establish official diplomatic relations.
By then, some in the archdiocese were already familiar with one face of the Catholic Church in Cuba, as Bishop Jorge Enrique Serpa Perez had visited several Catholic Charities of Baltimore agencies Sept. 17.
The visit originated in the archdiocesan Office of the Propagation of the Faith, which is directed by Deacon Rodrigue Mortel. His office directs the Baltimore Haiti Project, where nearly two dozen parishes in the archdiocese send monetary aid and personnel support to sister parishes in the Diocese of Gonaives.
Related article: Pope Francis credited with urging U.S., Cuba, to normalize relations
A native of Haiti, the most impoverished nation in the Western Hemisphere, Deacon Mortel first visited Cuba in 2012.
“I realized the situation in which the people were living,” he said, “and decided to explore the possibility of establishing a relationship, having done that in Haiti.”
Deacon Mortel said that Baltimore-based Catholic Relief Services (CRS) pointed him in the direction of Caritas Cuba, the national coordinating agency for Catholic charities and social services. It is headed by Bishop Perez.
“When I visited Cuba again in July 2013, he and I met in Havana,” Deacon Mortel said. “We discussed establishing a relationship.”
Bishop Perez described nascent feeding centers to Deacon Mortel.
“The people get fed, but they don’t have enough food,” Deacon Mortel said. “We have sent funds there.”
Beyond that grant from the Office of the Propagation of the Faith, the size of which he declined to specify, Deacon Mortel discussed the long-range goal of formalizing a relationship between the Archdiocese of Baltimore and the Diocese of Pinar del Rio, the westernmost diocese in Cuba.
“For us to establish relations, we have to apply to the Department of the Treasury, on behalf of the Archdiocese of Baltimore, to approve travel,” Deacon Mortel said. “It was not easy before. It will become easier now, but we are not there yet.”
“It’s delicate,” said Dr. Diane Barr, chancellor of the archdiocese. “It takes time.”
It is not the first time the two dioceses have been linked.
Cardinal William H. Keeler, archbishop emeritus of Baltimore and Deacon Mortel’s initial sponsor here, celebrated New Year’s Eve Mass in 1997 in Pinar del Rio, where the then-bishop was an old friend who had visited Baltimore.
Cardinal Keeler was in Cuba with CRS, a few weeks prior to St. John Paul II’s historic January 1998 visit to the Communist nation, which was once officially atheist.
“I knew Cardinal Keeler had been to Cuba, but I did not know he had celebrated Mass in Pinar del Rio,” Deacon Mortel told the Catholic Review Jan. 7. “That makes the connection really tight.”
According to multiple news outlets, Pope Francis made personal appeals in 2014 to Obama and Raul Castro, encouraging both to normalize diplomatic relations between the two countries. Since 1960, the U.S. has imposed an economic embargo on Cuba.
Also see:
Reflection on U.S. ‘racial divide’ is personal for Illinois bishop
Vatican secretary of state expects pope to visit New York, D.C.
Catholic News Service contributed to this article.
PrevNext