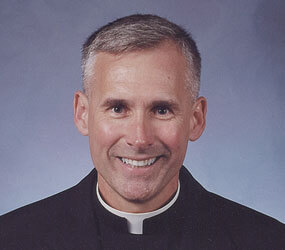 Father F. Richard Spencer, who was ordained in the Archdiocese of Baltimore and served in several parishes and at the retreat house in Sparks before becoming a U.S. Army chaplain in 1991, was named by Pope Benedict XVI in Rome May 22 auxiliary bishop of the Military Archdiocese and Titular Bishop of Auzia.

Bishop-elect Spencer is currently serving in Germany. The date of his ordination in Washington, D.C. has not been set.

Having served as Archbishop of the Archdiocese for the Military Services, USA, prior to coming Baltimore, Archbishop Edwin F. O’Brien is quite familiar with Bishop-elect Spencer.

In a statement released by the archdiocese, Archbishop O’Brien said, “I have known Father Spencer well for many years first in my capacity as Archbishop for the Military and now as Archbishop of Baltimore. We are proud the Holy Father has chosen him, one of our own, to continue serving our brave and generous women and men in the military.”

According to an archdiocesan news release, Bishop-elect Spencer was ordained by the late Archbishop William D. Borders at the Cathedral of Mary Our Queen in Homeland in 1988. He served at Sacred Heart in Glyndon, the Monsignor Clare J. O’Dwyer Retreat House in Sparks, and at St. Peter the Apostle in Oakland.

In addition to Germany, Bishop-elect Spencer has served Catholic soldiers in the former Bosnia/Herzegovina, Seoul, Korea, and the Sinai Peninsula. He was promoted to the rank of Lt. Colonel in the U.S. Army in 2005, and was appointed an Episcopal Vicar for the Archdiocese for the Military Services in 2006.

“In addition to his priestly ministries, Bishop-elect Spencer brings to his new ministry a wide variety of experiences in many fields,” said Archbishop Timothy Broglio, Archbishop for the Military Services. “That experience will certainly contribute to the richness of the episcopal ministry to which he is now called.”

Born in 1951 in Sylacauga, Ala., Bishop-elect Spencer earned degrees from Jackson (Ala.) State University and the University of Wisconsin, LaCrosse. He served as an active duty officer in the U.S. Army from 1974-1980, including duty with the Army’s military police.

He completed his studies for the priesthood at St. Mary’s Seminary in Roland Park.

Bishop-elect Spencer’s brother, Father Robert Spencer, is a priest of the Diocese of Charleston (S.C.) and serves as a chaplain for the U.S. Navy.