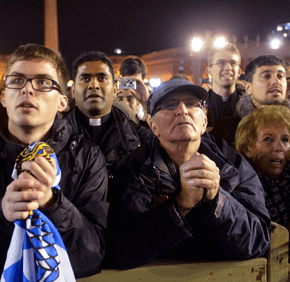 By Maria Wiering
mwiering@CatholicReview.org
Twitter: @ReviewWiering
“Once the conclave began, all eyes in town were on that chimney,” said Joshua Laws, a seminarian for the Archdiocese of Baltimore.
A theology student at Rome’s Pontifical Gregorian University, Laws was among those with Baltimore connections who experienced firsthand Pope Francis’ introduction as Supreme Pontiff of the Catholic Church.
Laws was in St. Peter’s Square each of the three times smoke was released from the Sistine Chapel chimney during the conclave. On March 13, most of the onlookers were expecting black smoke again.
“Once the white smoke came out, and it was just pouring out, the place went crazy,” Laws wrote in an e-mail to the Catholic Review. “Cheers and expressions of excitement and prayer and joy filled the square as everyone moved forward to get closer to the balcony, closer to our new Holy Father, whoever it was going to be.”
Also in the square were Loyola University Maryland students Andrea Pesce, 20, and Kaitlyn Hammel, 21, who are studying in Rome for the semester. St. Peter’s bells rang to announce the news, and the square crowded with people.
“Though it had been raining, everyone lowered their umbrellas and let the rain fall,” said Pesce, a native of Yonkers, N.Y., and a junior at Loyola. “People were singing, screaming, crying, cheering and waiting to discover who the new pope would be.”
They waited for more than an hour in the rain before the announcement came. The rain stopped, and 10 minutes later the thin white curtain pulled back. French Cardinal Jean-Louis Tauran, the senior cardinal in the order of deacons, announced “We have a pope” and his former name, Cardinal Jorge Mario Bergoglio.
“There were cheers followed by side conversations – ‘who?’” Laws said. “I saw more iPhones and smart phones being pulled out in those short minutes than I have seen in my whole life.”
Next to Pesce, an Argentina woman “was overwhelmed with emotion when she heard that someone from her country had been chosen,” Pesce said. “She cried and praised the Lord. Witnessing her joyous reaction made me even more thankful to be at St. Peter’s.”
Phones and iPads were at the ready to snap photos and video of the new Pope Francis as he emerged onto the balcony of St. Peter’s Basilica minutes later amid chants of “Francesco.”
“It was such a powerful emotional moment,” said Laws, a parishioner of St. Stephen in Bradshaw. “It was so awesome to see this humble man stand there, almost motionless, and imagine how he is feeling and what he is thinking as he stands there just taking it all in.”
A junior from north of Pittsburgh, Hammel said her first impression of Pope Francis was one of hope for the church.
“I understood only some of the Italian in which he spoke, but from everyone’s reactions I knew he sounded sincere,” she said. “I felt at peace when he spoke.”
During his address, Pope Francis made a move “that shocked everyone,” Laws said – before blessing the crowd, he asked the people for their silent blessing, and bowed his head.
“Complete silence covered St. Peter’s Square as a massive crowd of people from all over the world prayed over their new Holy Father,” Laws said. “That was an incredibly powerful moment full of spiritual gratitude, especially looking up at a simple man bowing in prayer. I couldn’t help but break down in tears as I held my hands out in prayer toward our Father Francis, this humble disciple.”
That moment struck Pesce, too.
“It is incredible that such a large, diverse group of people could unite in silence out of respect for Pope Francis,” she said.
After Pope Francis left the balcony, leaving the packed square was difficult, Hammel said. Pesce turned to her and said, “Let’s just soak it all in for a minute.”
Both Loyola and the Gregorian are Jesuit universities, and their students found significance in Pope Francis being a member of the Society of Jesus.
“Catholic means ‘involving all and ‘universal’ and I’d like to see the pope act out of love for the whole world,” Hammel said. “Being a Jesuit means he definitely already has this mindset of ‘men and women, for and with others.’ This means all others, not just Catholics, and not just those with a voice. I’d like to see Papa Francesco be one with the people and serve those in most need.”
Elizabeth Lowe contributed to this story.
See also:
Baltimore Jesuits rejoice in election of Jesuit pope
New pope inspired her faith, says Baltimorean who knew him in Argentina as teen
Copyright (c) March 19, 2013 CatholicReview.org
PrevNext