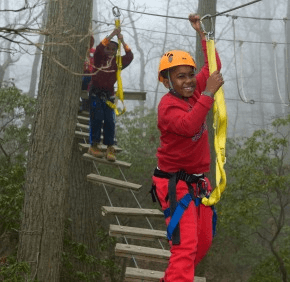 NORTH EAST – More than 300 sixth-graders from Catholic schools in the Archdiocese of Baltimore developed their leadership skills and scientific knowledge of tidal wetlands the school week of March 14-18 in Cecil County.

The students spent the week at NorthBay Adventure Camp in Elk Neck State Park, on the Eastern Shore, atop the Chesapeake Bay, but they weren’t the only ones testing themselves.

“Our teachers and chaperones learn as well,” said Madeline Meaney, the principal of Immaculate Conception School in Towson. “On one of the exercises, an instructor asked me, ‘When are you going to try?’ By the end of the week, I had been on a zip line and held a snake.”

Whether they were from a suburban parish school offering an extensive STEM (science, technology, engineering and math) curriculum, such as Immaculate Conception, or from one of the community schools serving Baltimore City, administrators and teachers described students leaving their “comfort zone” and having a transformative experience.

“A lot of our students come from the inner city,” said Meghan Cosgrove, the assistant principal and intermediate grades science teacher at Holy Angels Catholic School. “Being on the Chesapeake Bay, boarding a boat, clamming or being reminded why trees are important to the environment, our students are able to take what they learned back home.”

“What struck me most was watching our kids push themselves, physically and emotionally,” said Snyder, who had 14 St. Casimir students at NorthBay. “Battling homesickness or without mom and dad’s support, students were asked to climb high rope courses, muck around in a marsh or fly in a giant swing over the Bay.

“What makes that possible is NorthBay’s support system. There is no booing or negativity. When boys cry from missing home, peers provide encouragement. … Because of that foundation, students felt safe.”

The program’s spiritual component included Mass March 16, celebrated by Father Michael Triplett, pastor of Our Lady of Grace in Parkton. Its parish school, a National Blue Ribbon School in 2014, was among those participating.

Of the 318 students from the archdiocese at the camp, 62 were from Immaculate Conception.

“We send our entire sixth grade,” Meaney said. “It’s something the children look forward to all year, because the seventh- and eighth-graders who have been never stop talking about it. Students learn so much about the environment, and the importance of doing whatever they can.”

Names and Numbers: Students debate their way to scholarships, testify in Annapolis