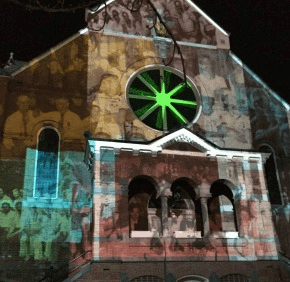 “It looks very nice,” he said. “They certainly did it respectfully.”

Light City Baltimore, which began March 28 and will end April 3, includes locations across the city, including Harbor East, the American Visionary Art Museum and Hampden. Operated by the Baltimore Office of Promotion and the Arts (BOPA), the festival is sponsored by Baltimore Gas and Electric and other partners.

Fracassetti also noted that churches in Italy, where she has visited many times, often light up their facades during street festivals honoring saints, a mainstay of Italian Catholic culture.

The light artist, Joe Reinsel, was enthusiastic about the idea, and BOPA held community workshops for residents to give input on the display.

According to Fracassetti, more than 300 photographs – “from the turn of the century to the most recent St. Leo’s ravioli dinner” – were collected from past and present Little Italy residents. Reinsel artfully collated them, added light elements of his own, and created eight videos to project onto St. Leo’s from a third story window directly across Exeter Street from the church.

Fracassetti said that many of the photos were provided by childhood neighbors of hers and her parents who had since “moved to the county.”

“I’ve seen many of them filter through Little Italy over the last week,” she said. “It’s been very nostalgic.”

Father Carman said that he appreciated the church’s inclusion in the event during an age when religion is seemingly less and less welcome in the public square.

“I like the idea that highlights the presence of the church right in the midst of the community,” he said.

The exhibit, titled “Il Tartufo Lucente,” will be on display from 7 p.m. to 11 p.m. through April 3. Fracassetti said that it is best to visit after 8 p.m., and recommends a vantage point at the corner of Exeter and Stiles streets.

Don’t worry about the weather.

“The artist said that it would be even clearer in the rain,” Fracassetti said.