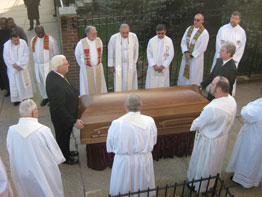 Even as Josephite Father Robert “Rocky” Kearns was on his deathbed in an Alabama hospital earlier this month, he was still talking about the world he was about to leave.

From the faltering economy to how difficult it was for the superior of his religious order to assign priests and brothers, he was mindful of the issues impacting others.

“That was Rocky,” said Josephite Father John Harfmann, speaking in a homily during Father Kearns’ Dec. 13 funeral at St. Peter Claver in West Baltimore. “He was thinking to the end.”

About 250 people said farewell to the much-beloved priest and former two-term superior general of the Josephites, remembering the Boston native as a man who brought the best out of others and who stood up for social justice.

That gathering included representatives from parishes served by Father Kearns in Alabama, Los Angeles and Washington, D.C. Father Edward J. Chiffriller, superior general of the Josephites, was among five con-celebrants.

Father Kearns was ordained a Josephite priest on June 8, 1963. Three symbols of his life as a Josephite rested on his closed coffin during the two-hour, 15 minute liturgy: a copy of the Josephite constitutions, a well-worn Josephite prayer manual and a Josephite mission cross.

Father Kearns died Dec. 6 at 72 after a short battle with cancer.

“Rocky’s greatest gift was his ability to tell people they could do a lot more than they thought they could themselves,” said Father Harfmann, consultor general of the Josephites. “He would always say, ‘It would be good for you. I see something greater. Come on and help me.’ ”

It was Father Kearns who made affordable housing possible in Baltimore, as an early supporter of Baltimoreans United in Leadership Development and Build Enterprise Nehemiah Development Corporation. The priest also encouraged African-Americans to become deacons in the church, Father Harfmann said, constantly looking for ways of cultivating leadership roles for them.

“He was always one step ahead,” Father Harfmann said.

The homilist noted that Father Kearns was sometimes susceptible to exaggeration when it came to promoting Josephite causes.

“He would say there are 1,000 people here today at his funeral,” Father Harfmann said with a laugh. “He always doubled everything.”

Bishop John Ricard, former auxiliary bishop of Baltimore and current head of the Diocese of Pensacola-Tallahassee, Florida, said Father Kearns was a man who always said yes to God.

“He had his face fixed on the ministry of the Gospel,” said Bishop Ricard, main celebrant of the funeral liturgy.

The bishop recalled that it was Father Kearns who encouraged Nigerian priests to serve in Josephite parishes in the United States. In tribute, about a dozen Nigerian seminarians attended the priest’s funeral.

“He was always a step ahead,” Bishop Ricard said. “He always thought of what could be possible.”

“He was someone who could get things done with a great deal of strength and gentleness,” Bishop Madden said. “He was never abrasive. He enjoyed life.”

Sister Alice Talone, president of the Sisters of Bon Secours, remembered serving as a parish nurse at St. Peter Claver. As pastor, Father Kearns encouraged her to visit the husband of a deceased parishioner even though he was not Catholic.

“He truly cared for each of his flock,” she said. “He lived out Jesus’ love to all he encountered.”