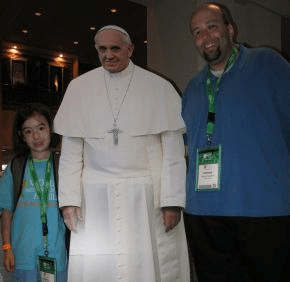 PHILADELPHIA – As his smiling 6-year-old daughter, Teresa, sat beside him drawing a picture of Pope Francis Sept. 25, Richard Legendre admitted to being “really pumped up” at the end of the four-day World Meeting of Families.

The parishioner of St. Philip Neri in Linthicum, who took a week’s vacation from his job at University of Maryland Baltimore to be at the international gathering of Catholics, rattled off a whole list of ideas for strengthening his marriage and family.

He plans to teach Teresa and her younger sister, Anna, to make the sign of the cross when passing a church.

He wants to pray the rosary more often, knowing that even if his children don’t always join him, they’ll see that it’s a priority in the family.

He  also wants to celebrate his children’s feast days and make more use of a prayer corner in the house that he and his wife, Jennifer, established a few months ago.

“Honestly, I’m probably trying to implement too many ideas,” he said with a laugh. “My wife will have to let me know what’s realistic. The main thing is to bring a Catholic culture into my family more so than just praying.”

Legendre, whose wife teaches physics and mathematics at Mount de Sales Academy in Catonsville, was among thousands from around the world who converged on Philadelphia Sept. 22-25 to gain insights on the family during presentations, workshops and liturgies. The event will be followed by the World Festival of Families Sept. 26-27 and a papal Mass Sept. 27.

“That’s really striking,” he said. “It makes me want to be a better husband and a better father.”

John and Claire Grabowski, parishioners of St. Ignatius in Ijamsville who serve on the Pontifical Council for the Family, said support for marriage and family is very much needed in today’s society.

“One of the biggest challenges facing the family in the United States is that many Catholic families don’t have a clear sense of what marriage is and how our understanding of marriage differs from the culture,” said John Grabowski, who was also a featured speaker at the event.

Many Catholics don’t know if the redefinition of marriage by the state is good thing or bad, he said.

“I think one of the biggest needs families have is for a deeper catechesis,” he said, “a better formation so they can understand what family is.”

The Grabowskis are coordinators of Marriage Matters, a program at their parish that helps families grow in their understanding of Catholic married life.

“Catholic families need to know that there are other families out there that have the same vision they do,” Claire Grabowski said, “and they want to help each other grow.”

Vickie Yozwiak, director of religious education at St. Louis in Clarksville, said many families are pulled in many directions. That’s where the parish can be supportive by providing opportunities to fall in love with Christ through family movie nights, Lenten/Advent activities, living rosaries and more.

Yozwiak found strength at the World Meeting of Families in seeing so many people from around the globe with a shared mission.

“To be united with Christ around the table of the Lord is just awesome,” she said.  “We will hear what the Holy Father says and then take that back to our parishes and homes.”

Several teens from St. Mary’s High School in Annapolis attended part of the World Meeting of Families and will be present for the papal Mass. They acknowledged serious challenges to family life, including divorce and general indifference.

“In today’s society, there are all types of ideas about what the family could be and what it should be,” said Monique Gill, a 17-year-old senior at the school and a parishioner of Our Lady of the Fields in Millersville. “What it comes down to is what God intended the family to be, which is between man and a woman, multiplying and expanding creation.”

Michaella Mulhern, a 17-year-old St. Mary’s senior and a parishioner of St. Mary in Annapolis, said it’s difficult for some people of her generation to attend church, especially those struggling with their faith.

“If you go to church every Sunday,” she said, “it really helps build your relationship with God.”

During a Sept. 25 lunch with a group of leaders from the Baltimore archdiocese attending the World Meeting of Families, Archbishop William E. Lori called the event a great opportunity and a source of inspiration.

“We’ll go back to share the Gospel in our lives,” he said, “and roll up our sleeves and get to work.”

For more local, national and international stories about the pope’s visit to America and the World Meeting of Families, click here.