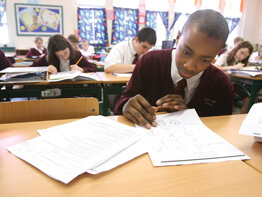 Though Catholic groups formed educational instruction in Baltimore in the 1790s, most educators consider a city school on Paca Street founded by St. Elizabeth Ann Seton in 1806 as the cradle of U.S. Catholic education.

In founding St. Frances Academy in Baltimore in 1828, Mother Mary Lange officially offered Catholic education to children of color and that tradition continues on as the co-educational high school on Chase and Eager streets strives for a superior learning experience.

“All of us in Catholic education know the important role Baltimore has played in the history of our church and in Catholic education,” said Karen M. Ristau, president of the National Catholic Educational Association, a group that will hold its 104th annual convention and exposition in the city April 10-13. “So it’s good for us periodically to revisit those roots to remind us of our history.”

In 1791 St. Mary’s Seminary and University in Baltimore became the first U.S. Catholic seminary. Throughout the 19th and 20th centuries scores of Catholic parish schools have opened and closed throughout the Archdiocese of Baltimore.

The U.S. bishops had strongly encouraged each new parish to open a school, and a great surge of students populated Maryland Catholic schools during the 1940s, 50s and early 60s – the heyday for area Catholic schools, said Dr. Ronald J. Valenti, superintendent of Catholic schools for the Archdiocese of Baltimore.

“In looking at Catholic education, Baltimore mirrors what happened throughout the U.S.,” Dr. Valenti said. “There was a large population of immigrants settling in the country in the 1930s and 40s, and after World War II the returning GIs wanted the American dream and a quality education for their children.”

However, the Catholic school system in Maryland and the rest of the country began to experience a decline in the later part of the 1960s and 70s as members of religious orders became more involved in social ministries and more lay teachers entered the parochial schools, causing a rise in tuition, he said.

“People also started moving out of the cities and into the suburbs,” Dr. Valenti said. “We had more (Catholic school) buildings in the city than population.”

In recent years several Catholic schools have merged or closed, but education in the system remains solid, with 98 percent of its high school graduates being accepted into quality colleges and universities, he said.

“We still have challenges, which will always be a factor, and they’ve escalated and we’ve had more to contend with,” Dr. Valenti said. “Education doesn’t come cheap, especially when you are keeping up with the demands and changes in technology.”