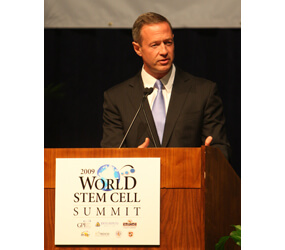 BALTIMORE – Maryland’s growing role in stem-cell research was highlighted Sept. 21 as researchers from around the globe gathered at the Baltimore Convention Center for the 2009 World Stem Cell Summit.

But the summit’s first major session featured a probing look at a wide array of ethical issues coming to the fore in the rapidly expanding field – not least of which is the moral status of the human embryo and the ethics of destroying those embryos to obtain human embryonic stem-cell lines.

In a keynote speech just before the opening plenary session, Maryland’s Gov. Martin O’Malley called stem-cell research a “new frontier” and said Maryland is at the “cutting edge of history” in the field – ranked No. 3 in the nation in assets devoted to biotechnology, after California and New Jersey.

O’Malley announced that after his talk he would witness the signing of a landmark agreement between the Maryland Stem Cell Research Fund and the California Institute for Regenerative Medicine, the first major agreement between two U.S. states to collaborate closely on stem-cell research.

The summit’s opening plenary discussion, “Ethics and Societal Issues,” featured specialists in bioethics, medicine, law and philosophy discussing some of the major ethical issues surrounding research on stem cells and their uses to cure diseases or disabilities.

High on that list was what Erica Haimes, a sociology professor at Newcastle University in the United Kingdom, called “the moral status of the human embryo.”

In Catholic teaching the intentional destruction of a human embryo is prohibited as the killing of an innocent human being – a view not widely shared among many scientists and believers of other faiths who do not regard the embryo or fetus as a person with human rights until later stages of development.

Of the $56 million spent by Maryland on stem-cell research over the past three years, more than half has gone to research on human embryonic stem cells, according to Nancy E. Paltell, Maryland Catholic Conference associate director of respect for life.

The MCC has consistently supported stem-cell research but opposes any such research that involves the destruction of human embryos.

Haimes, the founding executive director of the Policy, Ethics and Life Sciences Research Centre in Great Britain, discussed her research on patients at in vitro fertilization clinics in that country who are asked to donate “spare” embryos for stem-cell research and unused eggs for somatic cell nuclear transfer – a process that can turn an egg into a stem-cell line.

She said the collaborative relationship between in-vitro fertilization clinics and stem-cell research laboratories poses a number of ethical issues – among them the question of exploitation of people who approach the clinic as patients seeking assistance for infertility problems but are then viewed as potential providers for stem-cell research.

She described an egg-sharing program in Great Britain, in which IVF patients can obtain fertility treatments at a reduced fee in return for donating some of the eggs harvested in the treatment, as posing ethical questions.

Jeremy Sugarman, deputy director of the Berman Institute of Bioethics at the Johns Hopkins University in Baltimore, lead speaker on the ethics panel, said the U.S. National Institutes of Health guidelines on stem-cell research and the guidelines recently published by the International Society for Stem Cell Research – both available at www.isscr.org – are valuable starting points for assessing ethical issues in stem-cell research.

Jonathan Moreno, a professor of ethics, medical ethics and philosophy at the University of Pennsylvania, said that besides “deep philosophical disagreements over the moral status of the embryo,” stem-cell research confronts a number of other ethical issues.

Among those he cited were “the social role of the life sciences” and “the commodification of parts of our body.”