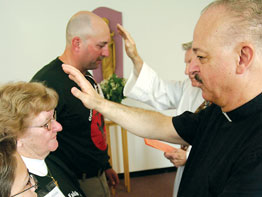 A diverse group of more than 40 parishioners from St. Anthony of Padua/Most Precious Blood parishes in East Baltimore gathered April 26 to take part in Operation Faith Lift. Operation Faith Lift is an annual event sponsored by the archdiocese’s Office of African American Catholic Ministries, and is promoted as a neighborhood evangelical outreach effort where parishioners join together in door-to-door visitations.

Before the neighborhood walk began, parishioners gathered for a 30-minute prayer service led by retired Deacon Joseph C. Krysiak, who asked the Holy Spirit for guidance and for the “boldness that was given to the apostles.” At the close of the service, Therese Wilson Favors, director of the Office of African American Catholic Ministries, spoke.

When asked about the overflow crowd in the small chapel, Ms. Favors said, “My heart is uplifted by the numbers.”

This was the first time parishioners of St. Anthony/Most Precious Blood, which began planning for the event about six months ago, participated, despite not being a traditionally African-American parish. Recognizing the increasing diversity of his flock, Father C. Lou Martin, pastor, thought that the time was right to “reach out into the community.”

“We want to give an invitation to people, especially those who are not connected with a church,” Father Martin said. “We want to sell a relationship with God. I think we can really touch somebody through prayer needs, or just by making people aware of the services that the parish and the archdiocese provide.”

Father Martin said that the participants’ mission was not to draw neighbors away from their church; rather, they were primarily interested in reaching the unchurched in the Gardenville community.

Along the walk was Sister Kathleen Swan, O.C.F., a teacher’s assistant at Mother Mary Lange Catholic School, adjacent to St. Anthony. “People like to see that somebody cares,” she said. “Those who aren’t Catholic are still interested in prayer.”

Joseph Nwobi of Nigeria was optimistic about the event’s prospects for the parish. “It is my hope that we get more souls into the church and increase our numbers.”

Another native of Nigeria, Francis Udenta said, “We want to reach out to our neighbors and pray for them if they need our help.”

The demographics of St. Anthony are a reflection of the unique population in the area. Father Martin estimates that 35 percent of his parishioners are first-generation African émigrés, and notes that many African nations are represented in the area, coming from countries such as Nigeria, Cameroon, Congo, Ghana and Sierra Leone. It is thought that new African immigrants settle in this part of East Baltimore mainly because of personal networking with other recent African arrivals.

In response to the changing community, St. Anthony plans to inaugurate Masses in the African language of Igbo starting in May. The Masses will be celebrated on Sundays at 2 p.m. with Father Anthony Abiamiri presiding. Igbo (pronounced “ebo”) is the language of the Ibo tribe in Southeast Nigeria.

A testimony to the strength of the growing African community in the area is the Igbo Catholic Community USA Convention, which was being hosted at the Mother Mary Lange Catholic School simultaneous to the neighborhood walk. Some 50-100 delegates and 200-300 members of the larger Igbo community were expected to attend, and Archbishop Valerian M. Okeke of Onitsha, Nigeria, was scheduled to be the keynote speaker. According to its Web site, the Archdiocese of Onitsha boasts 1,476,332 Catholics in 120 parishes.