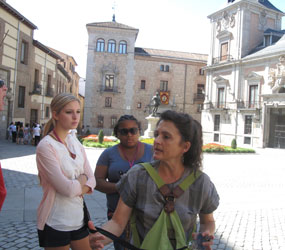 MADRID – Church of the Crucifixion parishioner Emily Sadler stepped off her Air France flight in Madrid Aug. 15 with her eyes open wide.

Traveling abroad for the first time in her life, she was ready for the trip of a lifetime.

“There’s not a better way to do it than World Youth Day,” said the 2011 graduate of Mount de Sales Academy in Catonsville. “I think it’ll really get me on fire for my faith.”

Sadler traveled with the Archdiocese of Baltimore’s contingent of 26, departing Northern Virginia’s Dulles International Airport Aug. 14 and arriving in Spain’s capital city the next day.

They were among the more than one million young Catholics expected to descend upon Madrid for World Youth Day, an event hosted by Pope Benedict XVI.

Blessed Pope John Paul II started the event during the 1980s and it has become a tradition to reach out to the church’s young people. The last time the young church gathered was in Sydney in 2008. This year’s gathering runs Aug. 16-21.

Sadler was the lone parishioner from Crucifixion in the archdiocesan contingent, which was mostly made up of teenagers currently in high school. She made friends, however, with parishioners of St. Ann in Hagerstown, Cathedral of Mary Our Queen, Homeland and St. Veronica in Cherry Hill.

“There’s a lot of diversity, in terms of the ages,” said Georgina Vaca, coordinator of Hispanic youth and young adult ministry for the archdiocese. Besides Sadler, two other young adults, Marimar Trejo of St. Joseph in Cockeysville and Keisha Miles of St. Veronica, made the trip.
Mount de Sales and St. Mary’s High School in Annapolis also brought a group of students to World Youth Day.

“The group really mixes well,” said Scott Miller, the director of the archdiocese’s Division of Youth and Young Adult Ministry. “We’ve been blessed with beautiful, easy travels and beautiful weather so far.”

Miles’ sister, Teisha, was one of the high school pilgrims. Teisha said she was looking forward to her first World Youth Day.

Images of Pope Benedict were hung throughout the city and official World Youth Day merchandise was sold on nearly every street corner.

On their first day in Madrid, the archdiocesan group toured a city that features Christian- and Muslim-influenced architecture. They went inside one of Spain’s marquee bull fighting stadiums and saw the outside of a cathedral, the royal palace and other attractions.

During their journey, which included a layover in Paris, many young people speculated about how Madrid might look. Upon arrival, they were surprised how Americanized the town was. Despite its clear Spanish identity, Madrid has skyscrapers designed by U.S. residents.

“It kind of reminds me of Baltimore,” Sadler said. “Obviously, the architecture is beautiful, but it’s a normal city.”

Nearly all who traveled brought high quality digital cameras to capture memories. Some talked about using Twitter and Facebook to keep their family and friends up to date about their travels.

Over the coming days, the Baltimore group was expected to take part in catechesis sessions and nighttime youth festivals. World Youth Day is scheduled to close with a Mass celebrated by the pope.

“I am so excited,” Sadler said.