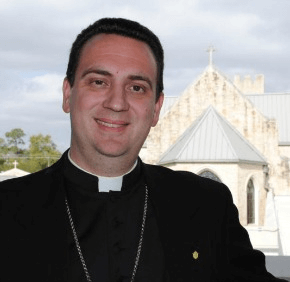 Pleasing Baltimore-area Catholic priests who were formerly Anglican, Pope Francis has named Monsignor Steven J. Lopes as the first bishop of the Personal Ordinariate of the Chair of St. Peter. Based in Texas, the ordinariate serves former Anglicans in the United States and Canada.

“In my personal opinion,” said Father Edward Meeks, pastor of Christ the King in Towson, “this provides a measure of stature that says to us that the church is serious about the ordinariate and about it being a permanent structure.”

Formerly Anglican, Christ the King became a Catholic parish June 24, 2012. Father Meeks, who has served as pastor of the church since its founding in 1996, was ordained a Catholic priest the day before.

Pope Benedict XVI established the Personal Ordinariate of the Chair of St. Peter, which apart from its geographical size could be considered equivalent to a diocese, in 2012. It was formed, according to the ordinariate’s website, ordinariate.net, as a “key ecumenical venture exemplifying the Second Vatican Council’s vision for Christian unity, in which diverse expressions of one faith are joined together in the Church.”

While offering a path to communion with the Roman Catholic Church, the ordinariate also allows the retention of elements of Anglican worship traditions and spiritual heritage within that union, the website explains.

The appointment of Bishop-designate Lopes, 40, was announced by the Vatican Nov. 24 along with the announcement that Pope Francis had accepted the resignation of Monsignor Jeffrey N. Steenson, 63, who had led the ordinariate since its establishment.

“I welcome this news with all my heart, for the ordinariate has now progressed to the point where a bishop is much needed for our life and mission,” Monsignor Steenson said in a statement posted on the ordinariate’s website.

A former Anglican bishop, his married status rendered him ineligible to become a Catholic bishop.

“Monsignor Steenson has been a great gift to the ordinariate over the last several years,” said Father Albert Scharbach, who on Jan. 1, 2016, will assume the duties of pastor at Mount Calvary in Baltimore, formerly an Anglican community.

Father Scharbach, who served as an Anglican priest in Philadelphia, became Catholic in 2009. As his conversion predated the establishment of the ordinariate, it would be five years before his ordination to the Catholic priesthood. He currently serves as a pastoral associate for Neumann vicariate for the Archdiocese of Baltimore.

Shortly before his ordination, Father Scharbach attended a retreat led by Bishop-designate Lopes.

“His talks helped to form me as a Catholic priest,” he said in an email. “His words were profound, and I still refer to them often. That is why I am especially grateful to have him as a bishop.”

“If I were making the selection, he’s exactly the man I would choose,” Father Meeks echoed. “He’s been involved in this work from the beginning, and he’s one of the very best friends I think we have in the Vatican.”

Once ordained, Bishop-designate Lopes will have the power to ordain new priests to serve the ordinariate. Father Scharbach noted that, up to now, those priests had to be ordained through the cooperation of the local dioceses.

“It helped integrate the ordinariate with the dioceses around the country, and that was beneficial,” Father Scharbach said. “But that has happened now – it has come time for the ordinariate to be able to ordain on its own.”

Both Father Scharbach and Father Meeks were drawn to the unique authority of the Roman Catholic Church.

“We wanted to be under the authority of the Chair of St. Peter,” Father Meeks said.

“There was no doctrinal consistency in the Anglican world,” Father Scharbach said. “I could make the church how I wanted it, which was nice in a way, but who am I to decide everything?”

Bishop-designate Lopes was ordained a priest for the Archdiocese of San Francisco in 2001, and has worked at the Congregation for the Doctrine of the Faith since 2005. Since 2012, he was also served as secretary of the Vatican’s “Anglicanae Traditiones” commission, which was responsible for developing “Divine Worship,” the new missal for use in the personal ordinariates. The missal combines elements of the Catholic and Anglican liturgical traditions.

In a statement posted at ordinariate.net, Bishop-designate Lopes thanked Monsignor Steenson, who he called “an outstanding example of wisdom, graciousness and evangelical zeal.”

The bishop-designate referred to his new position as “a great joy and privilege.”

“I stand among women and men for whom ‘Catholic communion’ is no abstract concept,” he added. “They have sacrificed for it.”