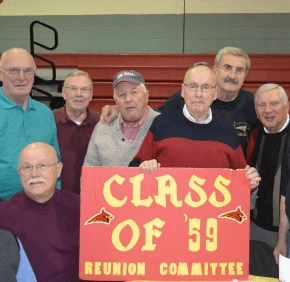 By Erik Zygmont
ezygmont@CatholicReview.org
When the years are spent together, changes are harder to see.
As they proceed to their homecoming night Nov. 25, the dozen or so members of the Calvert Hall College High School class of 1959 that attend every year will not undergo the shock of seeing, in an instant, the cumulative effects of 56 years on their classmates.
Gerard Cox, 74, has not missed a Turkey Bowl, held Thanksgiving Day, the morning after alumni night, in 65 years.
“It’s a family tradition with us,” said Cox, 74, a retired financial examiner and resident of Bel Air, whose father began taking him to the annual football game when he was in the fourth grade.
Even while serving in the U.S. Army, Cox was lucky enough to get leave for Thanksgiving, he said.

As with classmates, his connection to the all-boys school in Towson transcends its 1960 move from its original location in downtown Baltimore. The spirit remains rooted, he said.
“It’s hard to define,” Cox said of that spirit, though he credited the Brothers of the Christian Schools, the religious order that founded and still runs the institution, with perpetuating it.
Seventy-five-year-old Jim Anton, a semi-retired executive with O’Shea Lumber Company in Pennsylvania, agreed.
“I think there’s a warmth to the school that the Christian Brothers seem to create,” said Anton, another alumni night regular, who went into the lumber business with Michael O’Shea of the class of 1960.
“There’s discipline there, but at the same time, they were your friends,” Anton continued. “You could go to them if you had a problem. I think that goes for people who graduated 50-some years ago, like I did, and for people who did a year ago.”
Not only have alumni remained connected to the school, but to each other as well. Donald Kent, who served as  a Baltimore City police officer for 28 years before moving on to other careers, noted that the class of 1959 always gets a table for the Alumni Bull and Oyster Roast.
The classmates enjoy less structured activities, such as fishing and golf, “like most old guys,” Anton said.
Kent noted that in the Baltimore area, people mention where they went to high school, rather than college.
Cox compared going to Calvert Hall with “going to Harvard or something.”
“It’s an old school with old buildings and old traditions,” he said.
And that’s a good thing.
“I figure that Calvert Hall put me on the right track when I was a young man,” Anton said. “It gave me a lot of the values that I have to this day.”
“We are just so proud to be men of Calvert Hall,” Kent added.
Calvert Hall meets Loyola Blakefield in the 96th Turkey Bowl Thanksgiving Day, Nov. 26 at 10 a.m., at M&T Bank Stadium.