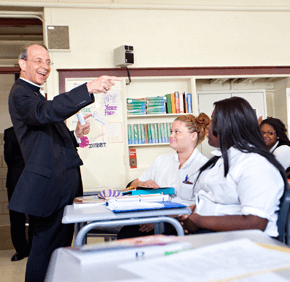 On the feast of the Exaltation of the Holy Cross, Baltimore Archbishop William E. Lori celebrated Mass Sept. 14 with the Cristo Rey Jesuit High School community in Fells Point.

It was a significant day for the school’s freshmen, as more than 100 received wooden crosses on necklaces in a ceremony during the school’s sixth annual Mass of the Holy Spirit, at adjacent Holy Rosary Church.

In his homily, the archbishop told students that the feast day “celebrates the victory of Jesus Christ over sin, over death and over all kinds of human weakness.”

“You got a full review thanks to the fact that I showed up,” Archbishop Lori said with a wide smile.

The archbishop’s visit was “a wonderful opportunity for the students to see he cares and is concerned with what’s going on in our classrooms,” said Laufersweiler-Hanf, who noted most of her students are not Catholic and for many, this was their first Mass.

“It’s kind of cool their first experience will be with the archbishop,” Laufersweiler-Hanf said.

Shawn Vega, a freshman at Cristo Rey, said receiving his wooden cross “felt like an achievement” and expressed his delight that Archbishop Lori came to celebrate Mass.

“It was an honor to see him and to have him speak to us and say our prayers,” said Vega, 14.

Cristo Rey junior Kelly Casella said that “it was an awesome experience seeing the new archbishop” for the first time.

“We’re important to him so we have to be a good school,” Casella said.

“The students were really blessed by his presence,” Malone said. “It was just a beautiful day all around.”