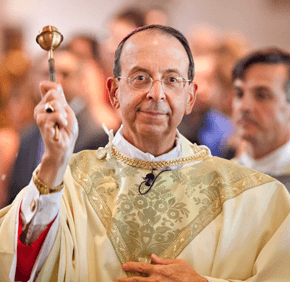 Baltimore Archbishop William E. Lori and Father Gerard C. Francik, pastor of St. Mark, Fallston, arrived at the Fallston church Sept. 30 as clergy did in the 19th century – by horse and carriage.

A large white horse pulling an open carriage clip-clopped up Old Fallston Road Sunday afternoon, arriving to waves and cheers from parishioners and the Knights of Columbus. The archbishop was all smiles as he exited the carriage.

The Mass and anniversary dinner concluded the parish’s 125th anniversary celebration, which began in January.

Use the arrows below to navigate the slide show:

“People have really come together as a community through all of these events,” Father Francik said. “They’re having a good time, they’re enjoying themselves, they’re meeting parishioners. It just makes me proud to be the pastor.”

The anniversary weekend began with a Mass of Remembrance Sept. 28 to “remember, honor, respect those people who came before us,” said Jim Riley, a St. Mark parishioner and co-chair of the 125th anniversary committee.

The church, established as a mission in 1887 and as a parish in 1968, currently has about 1,650 parishioners, Father Francik said. The parish has grown by nearly 150 parishioners in nearly two years.

“It’s been a great team effort,” Father Francik said. “People are having fun doing it. They’re claiming it as their own.”

Since Father Francik’s December 2010 arrival, he has energized the parish with his personality and spirituality, Riley said.

“The parish is very caught up in the 125th anniversary,” Riley said. “We’ve really come a long way. We’re very happy to have Father Jerry.”

JoAnne Gunther, a parishioner, Riley’s cousin and co-chair of the 125th anniversary committee, said parishioners have relished this year of celebration.

“People have really enjoyed the different things that we’ve done,” said Gunther, whose great-grandmother was a St. Mark parishioner. “It’s been a nice sense of celebration. I’m excited to see where we go from here because I know we’ll continue to grow and our faith will continue to grow.”