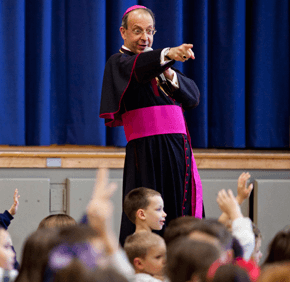 BEL AIR – Ethan Delp was almost at a loss for words he was so eager to hear from Baltimore Archbishop William E. Lori.

Archbishop Lori visited St. Margaret’s middle school, then elementary school. His message was the same at both campuses, which are about three miles apart.

The archbishop likened the Baltimore Ravens having a game plan – the team faces off against the San Francisco 49ers in the Super Bowl at 6:30 p.m. Feb. 3 – to the students’ faith and encouraged them to think about what God is calling them to do.

“What do we (the Ravens) need to win?” Archbishop Lori asked. “We need a winning strategy. The same thing is true about your faith. You’ve got to have a game plan.”

To view a slideshow of the event, navigate the arrows below.

He outlined three steps for students to follow: know their faith, have confidence in their faith and that their team – the Catholic Church – needs fans.

“Begin to think about your role in the team we call the church,” Archbishop Lori said. “Start thinking about the position you’re going to play.”

His analogy was well received by students, who were excited to talk about the home team.

Seventh-grader Jordan Wrzesien said the way Archbishop Lori “intertwined football … everyone could relate to it.”

Jordan, who envisions herself getting married one day, appreciated the archbishop’s visit, which was meant to “inspire us to start thinking about our vocations.”

Sixth-grader Madison Oswald, who is considering the call to be a religious sister, had a smile from ear-to-ear as she said “the archbishop coming to our school is ‘wow.’ That means a lot.”

The event included priests and religious talking to students in their classrooms about vocations.

Daughter of Charity Sister Denise LaRock and Sister of St. Joseph of Philadelphia Kathy Claflin fielded questions from fourth-graders, which included what is a typical day like, their favorite saint and the most important part of their job.

Sister Denise told students her job is about “sharing that Jesus loves you as an individual.”

She continued, “Jesus loves you hugely, even more than your parents.”

Madeleine Hobik, St. Margaret’s principal, told the elementary school students to “pray for people to answer Jesus’ call and be leaders in the church.”

Ethan, the fifth-grader, said he has, “at some points of my life,” considered the priesthood and brotherhood.

“It’ll come up,” said Ethan, who added his faith “really means to be part of Christ’s work. It’s a very nice faith to be a part of.”

Catholic Schools Week, Jan. 27-Feb. 2, is a time for students, educators and supporters to reflect on the mission of Catholic education.