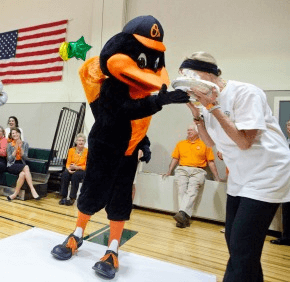 By George P. Matysek Jr.
gmatysek@CatholicReview.org
If you want to meet some of the most passionate and quirky fans in baseball, come to Section 336 in the upper deck of Oriole Park at Camden Yards.
That’s where you’ll find an older fellow with a gravelly voice who gives this answer at the top of his lungs to any umpire who delivers a questionable call: “If you had one more eye, you’d be Natty Boh!”
The fan uses even more colorful language to express enthusiasm when the O’s score a run – imaginative verbiage that can’t be repeated in a family newspaper.
You’ll also meet a young woman who puts everything she’s got into pumping up the crowd. On several occasions, I’ve seen her all decked out in O’s gear, running in front of the seating bowl and frantically waving her arms like an orange Kermit the Frog. She doesn’t care about how goofy she looks, only about supporting her team.
There are other regulars: dads who help sons keep score with pencil and paper, and young college guys who lead the ubiquitous “Seven Army Nation” chant.
Before family responsibilities prevented me from renewing my season tickets this year, I was a 336 regular. Over the years, sitting high behind home plate, a group of friends and I witnessed some pretty bad baseball. Yet the regulars were always there, even when the ballpark had more seats empty than filled.
Then, slowly, things began to change. Sparked by the leadership of Buck Showalter, the team played differently, more passionately. Players connected with fans in a way they hadn’t before. More people began showing up at the games. Baseball was fun again.
Today, everyone’s a fan, and the city is filled with pride for a team that won’t
give up.
Priests such as Father Collin Poston, pastor of St. Mary in Hagerstown, and Father Matt Buening, pastor of St. Paul in Ellicott City, are among the most vocal in support of the O’s. So are women religious such as Sister Paulette Doyas, a School Sister of Notre Dame, whose office on the campus of Notre Dame of Maryland University in Baltimore is crammed with O’s memorabilia.
Catholic schools throughout the archdiocese are getting in on the fun. Students at The Seton Keough High School stood together outside their Baltimore campus to form a gigantic letter “O” for their team. On the east side of town, Marsha Meyd, principal of The Catholic High School of Baltimore, recently followed a new O’s tradition by playfully taking a pie to the face during a visit to the school from the Oriole Bird (see photo).
After watching their team sweep the Detroit Tigers in the run to the World Series, fans have high expectations. But they have something more, something that has been around Section 336 for years.
“Hope,” the Merriam-Webster’s Collegiate Dictionary tells us, is to “desire with expectation of obtainment.”
Baltimore is awash in hope.
To read more Amen columns, click here.
Also see:
Who is the Oriole bird anyway?
Orioles pitcher Tommy Hunter successfully closes on his Catholic faith
Woman who started RU-486 abortion regimen was able to save her baby
Red or blue, the next governor will be Catholic
PrevNext