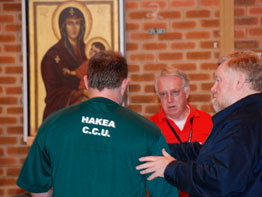 PERTH, Australia – Australian prisoners got the chance to venerate the World Youth Day cross and icon during a Mass at Hakea Prison in Canning Vale, Western Australia.

Oblate Father David Shelton, a Perth prison chaplain, concelebrated a Mass for the feast of the Body and Blood of Christ May 25 inside the prison’s gymnasium with Perth Archbishop Barry Hickey.

One of the 40 prisoners who attended the Mass said he asked for forgiveness as he approached the cross. The young man in his early 20s, who cannot be named for security reasons, said he returned to his Catholic faith when he entered the prison months ago.

Father Shelton, a prison chaplain for 11 years, said the World Youth Day cross and icon had previously only been allowed to go as far as a prison’s perimeter, but Ian Clark, the prison’s superintendent, said he could “see no reason why the cross should not enter a prison.”

“It could provide an avenue for rehabilitation,” said Clark, who also told The Record, newspaper of the Archdiocese of Perth, that 42 percent of the prison’s inmates are Aborigines.

“Everything must be given an opportunity, providing it does not incite them to acts of violence, which the cross obviously won’t,” he said.

The World Youth Day cross and icon arrived in Perth May 20 for a five-week road trip of more than 5,000 miles and four dioceses. They will be carried to remote aboriginal communities around the state in the dioceses of Bunbury, Broome and Geraldton, before being returned to Sydney July 1 for the official countdown to World Youth Day, which begins July 15.

Archbishop Hickey, who visits the Hakea prison at least twice a year, spoke to prisoners about the redemptive nature of suffering, telling them that the cross not only represents suffering but also victory over death and suffering.

He invited the prisoners to take their troubles to Christ and urged them to “trust God, just as Jesus trusted his Father when he was nailed to the cross.”

The archbishop also invited the prisoners to pray to Mary, depicted in the icon, for the strength to “carry their cross” and endure their suffering.

He later told The Record that based on his previous meetings with prisoners they often have “a lot of faith” which they draw on “perhaps more than in other situations in life, as they’ve got plenty of time to think.”

Pope Benedict XVI has granted a plenary indulgence to anyone who “devotedly takes part in a sacred ceremony carried out publicly in honor of the cross of the World Youth Day.”

The cross and icon were handed to Australians in Rome on Palm Sunday 2006, and since then they have been carried through Europe, Africa, Asia and Oceania.