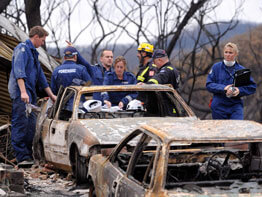 CANBERRA, Australia – The head of the Australian Catholic Bishops’ Conference said the Catholic Church would lend both spiritual and practical support to families victimized by a series of wildfires that left more than 180 dead in Victoria state.

“I know that Catholic parishes across Australia have been praying for the people who died in the bush fires, as well as for those experiencing the grief of losing loved ones, family homes and cherished pets and belongings,” said Archbishop Philip Wilson of Adelaide, conference president, in a Feb. 9 statement.

“Catholic relief agencies, such as St. Vincent de Paul and Centacare, are already at work providing much-needed assistance to people on the ground in these communities. This support will continue over the coming months and years, as we walk with these families and communities in their time of need,” Archbishop Wilson said in a Feb. 9 statement.

“My prayers and thoughts are with all who are suffering so grievously,” Archbishop Wilson said.

In a separate statement, Good Samaritan Sister Clare Condon, president of Catholic Religious Australia, the nation’s organization for men and women religious, said, “With all Australians, we will work to provide the practical support and help that is needed.”

At the Vatican, Cardinal Tarcisio Bertone, secretary of state, sent a telegram to Quentin Bryce, governor general of Australia, assuring her of Pope Benedict XVI’s prayers for those affected by the fires as well as for those providing aid.

Denis Fitzgerald, executive director of Catholic Social Services Victoria, said in a statement that the emergency relief arm of the St. Vincent de Paul Society was “providing immediate assistance and assessing needs for recovery” on a parish-by-parish basis.

“Their professional expertise in counseling is very important and will become more so over the coming weeks and months, as the recovery phase takes off,” Fitzgerald said.

Archbishop Wilson urged people to give generously to emergency appeals being established to assist those affected by the fires. Archbishop Denis Hart of Melbourne, the capital of Victoria, established one appeal; the St. Vincent de Paul Society set up another.

Australian Prime Minister Kevin Rudd announced immediate emergency aid of $10 million (US$6.8 million), and government officials said the army would be deployed to help fight the fires and clean up the debris.

The Country Fire Authority in Victoria said some 850 square miles were burned. Some towns were fully lost to the flames. Australian authorities said they expected the death toll to top 200.

The Associated Press reported blazes had been burning for weeks across several states in southern Australia. A long-running drought – the worst in a century – had left forests extra dry, and fire conditions Feb. 7 in Victoria were said to be the worst ever in Australia.

Wildfires are common during the Australian summer. Government research shows about half of the roughly 60,000 fires each year are deliberately lit or suspicious. Lightning and people using machinery near dry brush are other causes.

Police were investigating whether any of the Victoria fires had suspicious origins.

Australia’s previous worst fires were in 1983, when blazes killed 75 people and razed more than 3,000 homes in the states of Victoria and South Australia during the “Ash Wednesday fires.” Seventy-one died and 650 buildings were destroyed in 1939’s “Black Friday fires.”