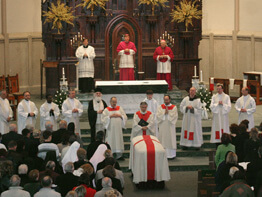 WORCESTER, Mass. – In silence, Audrey Santo witnessed to the world, preachers and participants said at an April 17 wake for her at St. Paul Cathedral in Worcester and at her funeral Mass there the following day.

Santo, 23, who died April 14 at home, was in a comalike state, unable to move or speak, because of an accident when she was 3 years old, but people had flocked to her bedside at her family’s home, where she was cared for.
Unexplained phenomena that seemed to happen in her presence drew thousands of visitors over the years. Many felt she could heal others.

More than 100 people attended her wake and about 300 were at her funeral.
People came from several states, including California, said John Clote, spokesman for the family. Media included ABC’s “20/20” and the local television news.

The main celebrant of the funeral Mass was Father John J. Foley, pastor of Christ the King Parish in Worcester, the family’s parish. Worcester Bishop Robert J. McManus and his predecessor, retired Bishop Daniel P. Reilly, attended the Mass, as did a dozen priests, a couple of deacons and several members of religious orders. Burial was private.

Santo fell into her family’s pool Aug. 9, 1987, at age 3. She was overmedicated at the hospital, lapsed into a coma that lasted three weeks and was left in a state called “akinetic mutism,” according to information from the Apostolate of a Silent Soul, which since 1996 had coordinated activities involving her.

After her accident, strange phenomena reportedly occurred in her presence. These included what some described as a faint scent of roses, and the oozing of oils and blood from religious statues and, on at least one occasion, from the Eucharist. Some people also claimed to have been healed of physical illnesses or handicaps after seeing the girl.

Annual events for the anniversary of her accident drew people from around the United States and overseas to Christ the King Parish and her home, known as the “ministry house.” Some considered her a “victim soul” who suffered for others.

In 1998 Bishop Reilly, then head of the Worcester Diocese, established a commission to investigate the phenomena. The first phase ended with a January 1999 report that did not substantiate any miraculous happenings, but Bishop Reilly said the family’s dedication to Audrey was “the most striking evidence of the presence of God in the Santo home.”

“We may never fully understand the causes of various paranormal events which have been reported to have occurred in their home,” Bishop McManus said in a statement about the young woman’s death.

But he said everyone who visited was touched by “the unswaying commitment to life” family, friends and volunteers exhibited daily and that her mother “never treated her as any less a member of the family.”

“Every one of my children and grandchildren is a gift,” Linda Santo, Audrey’s mother, said in a statement. “People need to understand they can’t lose their faith when tragedies like Audrey’s accident happen. … I don’t blame God for the accident. I don’t believe God did this, but I do believe God used this event.”

“Audrey in flesh and blood presents the world with an inescapable either/or choice” – either every person is loved by God and possesses intrinsic value, or all are of no account, Melkite Father Emmanuel Charles McCarthy said in the funeral homily. As humanity decides the value of the least, it decides its own temporal and eternal future, he said.

“Audrey, never speaking a word, speaks a prophetic and salvific word that reaches to the end of the earth,” he said.

He praised the witness of her family, who prayed and rearranged their lives to care lovingly for someone the world would discount – a handicapped child with “no production value.”

“Audrey helped many people in her own way, sometimes just by her presence,” Father Foley said in his homily at the wake.

Sometimes God works when people are weakest, he said.

“We come with a heavy heart – the Santos have lost a daughter 23 years old,” and her death “will leave a very large hole in their lives,” he said. But he said God will give them what they need through the congregation’s prayers.