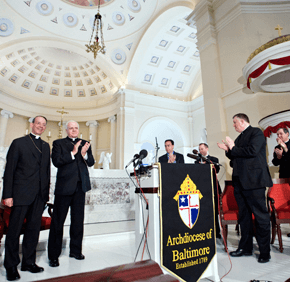 When Cardinal Edwin F. O’Brien introduced Bishop William E. Lori of Bridgeport as the 16th Archbishop of Baltimore during a March 20 press conference, the cardinal joked that “you have no idea how happy I am to see you.”

The incoming archbishop smiled and replied, “You have no idea how happy I am to be here in this wonderful Archdiocese of Baltimore, our nation’s Premier See. It fills me with joy. If fills me with gratitude – the very thought of shepherding this great church.”

The morning press conference, held at the Basilica of the National Shrine of the Assumption of the Blessed Virgin Mary in Baltimore, was held on the same day the appointment was announced in Rome.

Cardinal O’Brien, who has been serving dual roles as apostolic administrator of the Baltimore archdiocese and grand master of the Equestrian Order of the Holy Sepulcher, has known Archbishop Lori for many years. The cardinal said he has been impressed “by his deep love of the church and her people and by his extraordinary work both as Bishop of Bridgeport and as a valued leader on behalf of the United States Conference of Catholic Bishops.”

Cardinal O’Brien said Archbishop Lori “has ably pastored the priests and faithful of Bridgeport and has solidified the foundation of that local church in many key areas, most especially Catholic education, evangelization and priestly vocations.”

Archbishop Lori expressed “profound gratitude” to the pope for the appointment and to Cardinal O’Brien, Cardinal William H. Keeler and others for their support. He learned of the appointment one week prior to the announcement.

In the coming weeks, Archbishop Lori said he will get to know the priests of the Archdiocese of Baltimore who form what he called a “wonderful, strong presbyterate – a presbyterate with a proud tradition.”

He will also meet with other clergy, religious and lay people, he said, and learn more about the many ministries of the archdiocese.

“I’m looking forward to working with everyone so that we might unite in bearing witness to Christ,” he said, “and that we might join together in the spirit of loving service as this historic archdiocese proclaims the Gospel afresh for our times.”

A native of Louisville, Ky., Archbishop Lori received his master’s degree from Mount St. Mary’s Seminary in Emmitsburg. He was ordained a priest for the Archdiocese of Washington in 1977 by Cardinal William Baum.

His first assignment was as associate pastor of St. Joseph in Landover. He then served as secretary to Cardinal James Hickey, chancellor, moderator of the curia and vicar general.

During his episcopacy in Bridgeport, Archbishop Lori launched several initiatives in support of Catholic education, vocations, Catholic Charities, and evangelization.

In 2004, Archbishop Lori announced a major restructuring of the Diocese of Bridgeport’s 37 Catholic schools, which educate more than 11,000 children.

Archbishop Lori has served on several committees of the United States Conference of Catholic Bishops, including the Ad Hoc Committee on Sexual Abuse, where he was instrumental in drafting the Charter for the Protection of Children and Young People. He is a current member of the Committee on Doctrine, the Pro-Life Activities Committee and the Ad-Hoc Committee for the Defense of Marriage.

Archbishop Lori has been a strong voice in support of religious freedom, serving as chairman of the newly established Ad Hoc Committee for Religious Liberty. He has also been a leading defender of marriage as between one man and one woman.

During the basilica press conference, Archbishop Lori said religious freedom should be an issue that concerns all Americans.

As Archbishop of Baltimore, Archbishop Lori will serve as president of the Maryland Catholic Conference and expects to make his voice heard on important issues of the day.

“I think it’s very important we are there not only representing the interests of the church,” he said, “but looking for all the ways in which we can serve the common good.”

Archbishop Lori expects that religious vocations will be one of his priorities in Baltimore, building on the work of his immediate predecessors. During his tenure in Bridgeport, 35 priests were ordained and 39 seminarians are currently in formation. Eight orders of women religious and a new religious institute were all welcomed into the Diocese of Bridgeport under his leadership.

Asked about the ongoing parish planning process in Baltimore, Archbishop Lori said it’s “not uncommon in a large archdiocese like this one that consolidations would be thought of and be in the planning stage.”

“I certainly have to look at this very carefully,” he said, “listen to a lot of people, do a lot of studying and a lot of prayer.”

The new archbishop hopes to embrace a wide variety of tools for communication including print, electronic media and social media.

“This is where the young people are,” he said, “this is where some of this New Evangelization is driven forward and this is where you sometimes find people interested in giving their lives to a vocation as well. These are all instruments of the Gospel.”

Archbishop Lori noted that he has visited the archbishop’s residence on Cathedral Street “many times,” but never imagined that he would live there.

“One never knows what goes into an appointment,” he said, “but I would have to say the very thought of teaching the faith, promoting and defending religious liberty and serving the common good of society from a chair once occupied by Archbishop John Carroll is very humbling and I hope it will be a source of great strength and great grace for whatever the church calls me to do.”

Listen to the press conference: