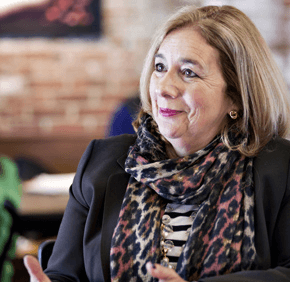 By Elizabeth Skalski
eskalski@catholicreview.org
BROOKLANDVILLE –Tracey Ford has landed a “fairy tale job.”
“The office is in the (Maryvale) castle,” Ford said. “I ended up in a castle not with a prince but because of hard work.”
Ford was named the first lay president of Maryvale Preparatory School in the school’s 66-year history March 8, succeeding Sister of Notre Dame de Namur Shawn Marie Maguire.
Sister Shawn, who arrived at the school in 1978 as assistant principal and as an English and religion teacher, announced her plans to retire last June. She has been president and headmistress of the Brooklandville school since 1981.
Ford, a former Maryvale Prep trustee, starts July 1. The school serves grades six through 12.
It was once in the school’s bylaws that a member of the Sisters of Notre Dame de Namur had to hold the position. It has never had a headmistress or president who was not a member of the religious order.
Ford said she is “humbled” by her new role.
“It will not be possible to (replace) Sister Shawn and the way she did the job. It’s a question of respect,” said Ford, who said being the head of a school is her dream job.
“I think it’s cool you get the job you want at (age) 56,” Ford said.
While she is developing specific goals for her new role, Ford said she plans to impress upon Maryvale students that “the way you succeed is through education,” hard work and life-long learning.
Ford said she plans to interact with students – a lot.
“The joy for me is that I get to be with the girls,” Ford said. “That’s fun time for me.”
A parishioner of the Catholic Community of St. Francis Xavier in Hunt Valley, Ford is a graduate of Notre Dame Preparatory School in Towson.
She has been married to her husband, Tom, for 26 years. They have two children; Henson, 22, and Molly, 19.
Ford is currently the director of development at Towson University. She has served as assistant head of school for advancement at St. Paul’s School for Girls in Brooklandville and director of development at Notre Dame Prep.
She is a graduate of the University of Virginia in Charlottesville and has a master’s degree in administrative science from the Johns Hopkins Carey Business School in Baltimore.
Jesuit Father Jack Dennis, director of campus ministry at Loyola University Maryland in Baltimore, has known Ford since high school. He said her being named to this position has been a long time coming.
“It’s been a matter of when, not if,” Father Dennis said. “She understands schools, she understands young women.”
Father Dennis called Ford a “very faithful, Catholic woman.”
“I think there are so many qualified lay people – they’re faith-centered people,” Father Dennis said. “I think she’ll go in very humbly and ask for their help but on the other hand I think she’ll go in with a vision.”
Sam Hoyle, the former president of the board of trustees for St. Paul’s School for Girls who was instrumental in hiring Ford at that institution, said she is the most qualified candidate in the area to lead Maryvale.
“I think (her) experience is a major factor and it’s so broad,” Hoyle said. “She will exhibit great care and nurturing for all the students and I think that will become quite clear because of her personality, her exuberance and her energy.”
PrevNext