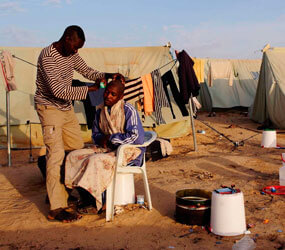 JERUSALEM – Refugees and migrant workers crossing the border from Libya into Tunisia continue to report incidents of hardship and extreme violence against them by Libyan nationals, said a Catholic humanitarian aid worker.

In a telephone interview, Tkalec said some of those fleeing the fighting and NATO airstrikes were beaten and robbed of travel documents and their other meager possessions as they attempted to cross hundreds of checkpoints to reach the Tunisian border.

The Libyan streets are especially dangerous for African migrants and refugees because the Libyan rebels identify them as African mercenaries who have come to fight alongside Libyan leader Moammar Gadhafi’s forces, Tkalec said.

Many Africans were afraid to even leave their homes initially but have now slowly begun to make their way to the border, she told CNS, adding that some workers said their passports were taken from them in order to prevent them from leaving the country.

“They are the main workforce in Libya,” explained Tkalec. “They were harassed and attacked. They have nowhere to go, and some are now still hiding. It is not safe for them to leave (their homes). But it is also impossible for them to stay. They can’t go out to get food and they have also been denied medical treatment.”

Catholic aid officials said at one point in March there were about 20,000 people at the camps, but by the end of the month there were only about 7,000. Tkalec said some 300,000 people – including Libyan nationals who have friends and families in Tunisia – have crossed the border into Tunisia since the conflict in Libya began in February.

Initially, she said, 80 percent of the refugees were migrant workers from Bangladesh, and staffers from Caritas Bangladesh had to be flown in to communicate with the nervous and frightened workers.

Danielle LeBlanc, director of the Tunisia-Libya emergency program of Secours Catholique-Caritas France who is based in the in the Ras Ajdir border area of Tunisia, told CNS by phone March 30 that many of the migrant workers were ashamed to return home because they had left to earn money for their families. Some migrants said they were afraid to go home because they were unable to pay off debts they had incurred in order to travel abroad for work, she said.

LeBlanc said many of the refugees were too frightened to report on what they have seen of the fighting because they were threatened in Libya.

She said some humanitarian aid groups were providing food and medicine within Libya but were keeping a low profile and not disclosing their locations for security reasons. Most of the aid has been coming in through the Egyptian border in the region where Libyan rebel forces have gained control, she said.

She added that many humanitarian aid organizations were positioning themselves on the Egyptian and Tunisian borders, preparing supplies for the moment they are able to enter Libya.

Sister Araceli Medina, a member of the Sisters of Notre Dame de Sion from the Archdiocese of Tunis, said Tunisians have rallied to help the refugees.

The national telephone company set up special telephone lines so the people could call their families and let them know they were safe, and supplies constantly arrive from Tunisians in trucks and trailers, she said.

“There is sadness there because from one day to the next these people have turned into refugees. They went to Libya to earn money for their families and then it turned out like this,” Sister Medina said in a March 29 phone interview from Tunis. “But what was marvelous to see was the help the Tunisian people gave. I never believed that they would be able to give so much help. There were a lot of university students and just simple Tunisians. The young soldiers were very courteous and kind.”