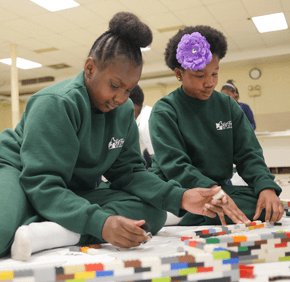 By Karen Osborne
kosborne@CatholicReview.org
Twitter: @ReviewOsborne
While building St. Peter’s Square in Rome, the Italian architect and sculptor Gian Lorenzo Bernini didn’t have to worry about giants tromping through his plaza.
That was a worry, however, for budding architects at St. Francis of Assisi School in Baltimore April 20, when more than a hundred students gathered in the church hall to build a Lego scale model of Vatican City.
Presided over by New Jersey architect Stephen Schwartz, whose company brings Lego models to schools across the Northeast, the model is a STEM project meant to help students better understand the workings of Vatican City, the smallest country of the world and the administrative center of the Catholic faith.

“When my clients are trying to understand something, we build a 3D model,” Schwartz told the students. “So that’s what we’re doing here.”
Using the colorful building blocks, students from the second to eighth grades gathered in small groups to build Vatican City’s walls, gardens, museums, residences and plazas, and then took a virtual “tour” of the finished product afterwards, stopping at St. Peter’s Square, the Sistine Chapel, and the Vatican Obelisk and learning about the buildings’ construction, history, and religious significance.
“Rome wasn’t built in a day, but Vatican City was,” quipped eighth-grader Rosa Lemonds, as she provided the finishing touches to a beige-Lego scale model of the dome at St. Peter’s Basilica.
Nearby, fifth-graders gingerly picked their way through St. Peter’s Square carrying a colorful version of the Swiss Guard barracks, student Aiden Nefferdorf worked on capping off the Vatican Obelisk.
By building a scale model of the city, St. Francis technology coordinator Scott Sands hoped to help the students make connections between real life and the material they were learning in religion class, bringing Vatican City out of the realm of books and legends.
During the building process, which took more than an hour and a half, Sands noted that younger students worked with their eighth-grade “prayer partners,” and utilized communication and cooperation skills to achieve their goals.
Lemonds, who had recently returned from a Spring Break family trip to Rome, noted that the model seemed very accurate, and pointed out sights she’d seen on her trip to friends.
“[Vatican City] is just so big and broad, it’s hard to take in all at once,” she explained. “You have to make circles to see everything. It’s really gorgeous. If you’re Catholic, you definitely want to see it – it’s amazing.”