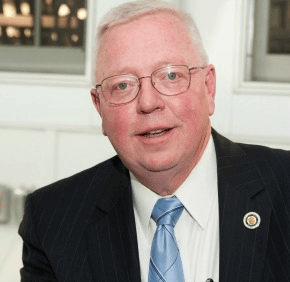 By Catholic Review Staff
Thomas Powell, who retired in March 2015 as president of Mount St. Mary’s University in Emmitsburg, will assume the role of president of St. John’s Catholic Prep, a coeducational high school in nearby Buckeystown, on Aug. 1.
“We believe that Dr. Powell’s leadership will help grow our institution to achieve greater success, improving its reputation as the finest college preparatory school in the Frederick community, while at the same time maintaining a vibrant Catholic identity,” said Jim Plamondon, chairman of the St. John’s board of directors, in a brief statement.
“His leadership at the Mount helped move that institution to new levels of excellence,” Plamondon added, “and his reputation for building relationships among faculty, staff, students and parents was outstanding.”
Powell will replace Gordon Oliver, who announced his resignation from St. John’s in the winter.
In March 2015, Powell told The Catholic Review that his most important challenge at the Mount was reasserting the school’s Catholic identity.
During Powell’s 12 years at the Mount, the school achieved university status and increased enrollment by 10 percent. Several capital construction projects – including a new dormitory and athletic stadiums – were initiated and completed under Powell. The Mount added new majors – sports management, criminal justice and human services – during Powell’s tenure, as well as new master’s degrees.
Powell and his wife, Irene, who have three adult children, recently adopted four young children from an orphanage in East Timor.

Pope: Marriage is a brave promise to love like Jesus, not a showy ceremony