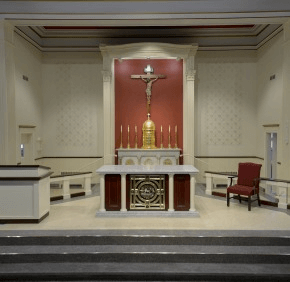 By Mary K. Tilghman
Special to the Review
CATONSVILLE – Doug Johnson remembered a metal piece stored at a stone mason’s shop. It might, he thought, be perfect for St. Agnes Church’s renovated sanctuary.
Now the centerpiece of the new altar, the lustrous brass square with an image of the Paschal Lamb will be front and center at every liturgical event at the Catonsville church.
“It did not look like that when I found it,” said Johnson, project manager for archdiocesan Facilities Management. “It looked like a forlorn piece of metal. It looks beautiful now.”
Archbishop William E. Lori dedicated the new altar Aug. 27, after the sanctuary had undergone a three-month transformation.

The sanctuary features an altar of reservation and a new tabernacle. The new main altar is closer to the congregation. There are new side altars, a reconciliation room that is wheelchair accessible, and new terrazzo flooring, paint and furniture. The baptistery was reopened.
“We have something from many generations of Catholicism,” said Father Michael Foppiano, St. Agnes’ pastor. “The sanctuary has had a number of incarnations over the years.”
The 1950 church was updated in the 1960s and again in the 1970s. “It was starting to show its age a little bit,” he said.
Father Michael DeAscanis, his predecessor, renovated the nave.
“When I came here I picked up,” the project, said Father Foppiano, who first wanted to return the tabernacle to the center of the church. “That was the main motivator, to move the tabernacle.”
The new tabernacle was built in the 1940s during renovations of the Basilica of the National Shrine of the Assumption of the Blessed Virgin Mary in Baltimore. The 54-inch-tall wooden structure with graceful curves and a cut crystal globe was only a mock-up for the final tabernacle design. Then it was no longer needed.
“It was put in the bell tower and sat there for 50, 60 years,” Johnson said.

Once Father Foppiano received permission to use it, it was restored and covered with gold leaf. It rests on the altar from the parish’s original 1852 church. After the old church was razed, it had served in the lower church.

The new dark-stained oak altar features a refurbished brass casting that once graced the altar of St. Peter the Apostle Church in Baltimore.
“We designed the altar around that piece,” said Brian Olsen, the architect from Skorpa Design, “to bring back the history of the church and blend in newer elements.”
Tom Doyle, of Hilgartner Natural Stone Company, recalls removing the piece after St. Peter the Apostle closed in 2008.
Behind new side altars honoring Mary and St. Joseph, walls were stenciled with a pattern of grapes, wheat and an ancient Christian symbol, the Chi Rho. The design continues on walls flanking the altar of reservation.
“It’s the backdrop of what’s happening. It adds to the experience,” said Stacey Clark Tranter of Twin Design Studios, who painted the delicate stencils in pale shimmering neutrals.
Some original elements were preserved: the white columns, statues of St. Agnes and the Sacred Heart, and tall brass candles.
Shade Construction was the builder.
Funds for the $200,000 project came from the parish’s Sanctuary Fund and the “Embracing Our Mission – Shaping Our Future” capital campaign.
“It all came from the people of the parish,” Father Foppiano said. “I think everybody will love it. Old things are new again. It should serve many generations very well.”

Catholic Campaign for Human Development offers a big hand up