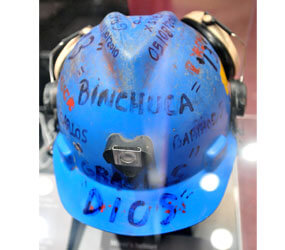 WASHINGTON – The dramatic and uplifting story of survival and a rescue that captivated the world one year ago unfolds in “Against All Odds: Rescue at the Chilean Mine,” a new exhibit at the Smithsonian’s National Museum of Natural History in Washington.

The exhibit opened Aug. 5, exactly one year after the mine collapse in Chile, in which all 33 miners survived and were rescued 69 days later.

The technical skill of the rescuers can be seen in the drill bit that cut through nearly one-half mile of rock, and the Fenix rescue capsule constructed by the Chilean navy in consultation with NASA. That capsule was named for the phoenix, the legendary bird that is a symbol of rebirth.

But the human spirit and faith that helped the miners endure is also on display, in the form of a small Bible, about the size of a hand, labeled Santa Biblia (“Holy Bible”), and the exhibit notes, “Miner Jose Henriquez, a committed Christian, read from this Bible when he led the men in daily prayer.”

Displayed next to the Bible is a scuffed blue miner’s helmet, with earphones on the side, and in the front of the helmet, scrawled with a black marker, are the words, “GRACIAS DIOS” (“Thank God.”)

That helmet belongs to miner Carlos Barrios, who also is seen in the exhibit in a large photo displayed behind the rescue capsule. As he emerges to the surface, smiling and waving, he has a simple white rosary around his neck.

At an Aug. 3 press preview for the exhibit, Barrios was among four of the rescued miners who stood together, holding a Chilean flag with the number “33” written on the white star. Different in age, build and looks, they shared a bond as brothers, fellow miners and survivors.

Media reports at the time said the men had prayed together underground, and had requested religious items when they made contact with the surface, and built small shrines to Mary in the mine as they waited together to be rescued.

Above ground, family members, friends and neighbors prayed together for the miners’ safety, their prayers joined by concerned people around the world, including Pope Benedict XVI.

At the press briefing, the miners helped introduce the Smithsonian exhibit about their survival and rescue, and answered reporters’ questions through interpreters. Barrios was asked about the words he had written on his helmet, and how the miners’ faith helped them survive. “The miners, they never thought they were 33. They were 34, because God was with them,” he said.

Another reporter asked the miners how they had endured those first 17 days, when they were about 2,000 feet underground, with no contact yet with the outside world. Miner Jorge Gallegillos, a stocky man with a gray scraggly beard, said: “The most important thing for us was faith, (to) believe in God, and make sure we were going to make it out of there.”

Later, a reporter asked whether they considered the rescuers or the miners themselves to be heroes. Miner Jose Henriquez, an older, clean-shaven man with an air of quiet dignity, stepped to the podium. He was the miner who had led the men in daily prayer with that little Bible.

“I do not consider myself a hero. If there was a hero, it was the 34th person. God brought us together,” he said, noting how they began praying together those first days, and then when contact was made on the 17th day, they asked for a Bible, and that little one was lowered to them. “It was God who guided us through this whole journey.”

The exhibit notes that Chile is the world’s leader in copper production, but on a nearby wall are the words of Chilean President Sebastian Pinera: “The principal wealth of our country isn’t copper, it’s the miners. It isn’t natural resources, it’s the Chileans.”

Barrios, who is 28 and has a 6-year-old son, hopes to eventually return to working in the mines, his occupation since he was a young man. “What I want is to go back.”

Asked if he felt like a different man since the mine collapse and rescue, he said, “I’ve changed regarding family. We are closer to our families, and also our faith in God. Many of us were not believers or close to God (before the collapse), but down there, I think we were with him.”