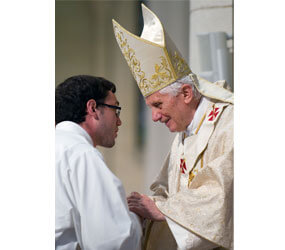 MADRID – Telling seminarians they must prepare seriously for the priesthood by devoting themselves to becoming saints, Pope Benedict XVI gave them a role model: St. John of Avila, who will become the Catholic Church’s 34th doctor of the church.

At the end of a Mass Aug. 20 with some 6,000 seminarians from around the world, the pope announced he soon would add the 16th-century Spanish saint to the short list of saints formally recognized for making a big mark on Catholic theology through their teaching and writing. His remarks were greeted with sustained applause in Madrid’s Almudena Cathedral.

Pope Benedict entrusted all the seminarians, as well as priests and bishops, to the intercession of St. John, a master of spirituality and a renowned preacher.

“As they persevere in the same faith which he taught, may they model their hearts on that of Jesus Christ the good shepherd,” the pope prayed.

Pope Benedict did not say when he would make the formal proclamation, and while the announcement was a bit of a surprise, it was almost a replay of how the news came out the last time a pope declared a doctor of the church.

The 33rd saint honored with the title was St. Therese of Lisieux. It was during World Youth Day in Paris in 1997 that Blessed John Paul II made the announcement; the formal ceremony was held at the Vatican two months later.

The doctors of the church are all saints and come from both the Eastern and Western church traditions. They include early church fathers like Sts. Jerome, John Chrysostom and Augustine, as well as major theologians like Sts. Thomas Aquinas, Bonaventure and John of the Cross. In addition to St. Therese of Lisieux, the women doctors of the church are Sts. Catherine of Siena and Teresa of Avila.

Jesuit Father Federico Lombardi, Vatican spokesman, told reporters Aug. 20 that a date for the ceremony has not been set.

He described St. John of Avila, who lived 1500-1569, as “a great master of priestly spirituality,” and an important influence on Spanish Catholic luminaries like St. Ignatius of Loyola, St. Francis Xavier, St. Teresa of Avila and St. John of the Cross.

“He was one of the important figures of the golden age of Spanish spirituality,” Father Lombardi said.

During the Mass for seminarians attending World Youth Day, Pope Benedict said the young men preparing for priesthood are “proof of how Christ continues to call young disciples and to make them his apostles.”

Pope Benedict told the students their time in the seminary “should be years of interior silence, of unceasing prayer, of constant study” and gradual introduction into pastoral activities.

But prayer, study and pastoral activity are not enough, he said: The seminarians must strive for holiness.

“The holiness of the church is, above all, the objective holiness of the very person of Christ” and “we have to be saints so as not to create a contradiction between the sign that we are and the reality that we wish to signify.”

Seminarians must be open to the grace of the Holy Spirit that will help them decide to live a life of celibacy, simplicity and obedience, he said.

“Approach the priesthood only if you are firmly convinced that God is calling you to be his ministers, and if you are completely determined to exercise it in obedience to the church’s precepts,” he said.