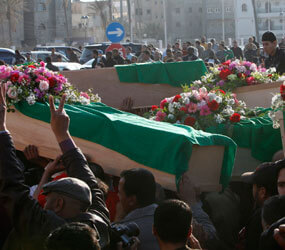 VATICAN CITY – At least 40 Libyan civilians have been killed as a consequence of airstrikes carried out by the United States and other Western powers, the leading church official in Libya said.

“The so-called humanitarian raids have caused dozens of victims among civilians in some areas of Tripoli,” the Libyan capital, Bishop Giovanni Innocenzo Martinelli, the apostolic vicar of Tripoli, told the Vatican’s missionary news agency Fides March 31.

“I gathered testimony from trustworthy people. In particular, in the neighborhood of Buslim, the bombardments caused the collapse of a civilian residence building, resulting in the deaths of 40 people,” Bishop Martinelli said.

The bishop said that while the bombing raids aim at precise targets, they have an impact on nearby buildings. Two hospitals have been damaged, he said, including one in Mizda, a city about 90 miles from Tripoli. News reports said 13 people were injured when a hospital at Mizda was damaged in an air raid on a nearby munitions depot.

Bishop Martinelli, who has called for mediation by the African Union in the conflict, has been critical of the military operation launched March 17 by the United States, France and Great Britain in support of rebels seeking to oust Libyan leader Moammar Gadhafi.

“For all one knows, the military action may be causing victims among the very civilians that they say are being protected by these military operations,” the bishop said March 30.

He said the situation in Tripoli was getting worse every day, with severe gasoline shortages.

“On a military level, there seems to be an impasse, because the rebels do not seem to have enough strength to advance. For this reason I am saying that a diplomatic solution is the best way to end the bloodshed between Libyans, offering Gadhafi a dignified way out,” he said.

On March 27, Pope Benedict XVI appealed for a suspension of fighting in Libya and the immediate start of a serious dialogue aimed at restoring peace to the North African country. He said he especially feared the consequences of the fighting on the civilian population.