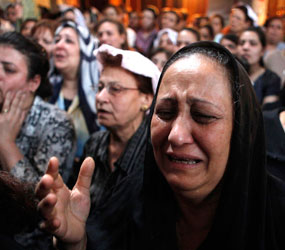 CAIRO – At least 12 people were killed and more than 100 were injured in attacks on Orthodox churches in Imbaba, part of metropolitan Cairo.

Initial reports from Cairo indicated no Catholic churches were involved in the violence. However, from Rome, the missionary news agency AsiaNews reported that the 16-year-old nephew of a Catholic bishop was killed in retaliation for a Catholic church offering shelter to an Orthodox priest.

Christians protested in Cairo May 9, two days after the violence began outside St. Mina Church in Imbaba, where several hundred Salafi Muslims gathered, claiming a Christian woman married to a Muslim man was being held there against her will.

A report from Arab West Report, a weekly digest of stories from the Egyptian press, indicated that the initial violence began in the late afternoon, and police did not arrive until 10 p.m. At least two, possibly three churches were burned.

AsiaNews quoted a spokesman for Egypt’s seven Catholic rites as saying the situation “is very critical” and that the government must protect all minorities from extremists.

Fides, the Vatican missionary news agency, quoted Comboni Father Luciano Verdoscia, who works in Cairo, as saying: “The neighborhood of Imbaba is a poor area, and fanaticism flourishes where poverty and ignorance reign. The Salafis are a group that is not the majority, but make themselves heard, even with violent actions. According to some commentators, these groups are controlled by the old (Egyptian) regime, who want to make others believe, ‘Look what is happening without us.’“