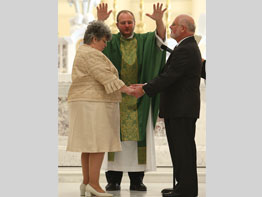 They took their vows of marriage – again, 35 years after the first time.

This time, though, the two lifelong Catholics wed in their church.

Until early November, Randy and Linda Sandusky didn’t think that would ever happen, but after an Archdiocese of Baltimore tribunal annulled Mrs. Sandusky’s first marriage, the couple wed Nov. 19 at a Mass at the Basilica of the National Shrine of the Assumption of the Blessed Virgin Mary in Baltimore.

He wore a charcoal suit, his gray-flecked hair giving way to a balding dome. She wore a tan skirt and top and white shoes. They joined hands and renewed their vows:

“I promise to continue to be true to you in good times and in bad, in sickness and in health …”

Father Jeffrey S. Dauses, the basilica’s pastor, stretched his arms to bless them and their marriage.

Everyone at the 12:10 p.m. Mass applauded the newly remarried bride and groom, and they received Holy Communion together.

The Fallston couple’s marriage in the church was a long time coming.

In the 1970s, Mrs. Sandusky divorced her first husband, making her ineligible to remarry in the church. She and Mr. Sandusky, a financial planner, married in a civil ceremony.

While both attended Mass regularly, neither was allowed to receive Holy Communion, except when Mrs. Sandusky got dispensation at her parents’ funeral Masses.

At his wife’s urging, Mr. Sandusky went to confession at the basilica in March and told Father Dauses he hadn’t received the sacrament in years. When Mr. Sandusky explained why, Father Dauses asked him to leave his name and phone number in the sacristy.

Father Dauses later asked the couple if they had considered trying to have Mrs. Sandusky’s first marriage annulled. Neither thought it was possible until he told them otherwise.

“They thought their marriage was not recognized by the church, that they were second-class citizens in the church and couldn’t share in Communion,” Father Dauses said.

With Father Dauses’ encouragement, they sought an annulment. It normally takes a year, but a church tribunal expedited the appeal so theirs was completed in seven months.

“I can’t say enough wonderful things about the tribunal office and Father Jeff,” Mrs. Sandusky said. “They were just so supportive and helped us through the whole thing.”

Leslie Engle, an ecclesiastical notary for the Interdiocesan Tribunal for the Metropolitan Tribunal of the Province of Baltimore, said she could not provide specifics on the reason for the annulment, because doing so would violate the Sanduskys’ privacy.

“There are a lot of misconceptions out there about obtaining an annulment,” Ms. Engle said. “There’s a lot of miscommunication that you cannot come back to the church once you’re divorced.”

“A lot of times when people look at the church, all they see are rules, thou shalt nots,” he said. “Actually, the church is much bigger. The church is about love of God. … It’s about the grace of God always working in us, and the church in this instance can really celebrate the healing and the reconciling of their marriage.”