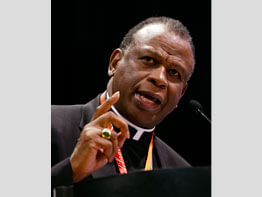 QUEBEC CITY – Several cardinals from around the world gave the status of church life in their countries and regions at the 49th International Eucharistic Congress.

“The Eucharist finds in Africa very favorable soil,” with people who believe in God and are open to God, Cardinal Theodore-Adrien Sarr of Dakar, Senegal, told thousands of pilgrims in a Quebec stadium.

Noting that he could not do justice in explaining the entire continent because of its diversity, he focused on the West African nation of Senegal during his talk at a June 16 workshop called “The Vitality of the Eucharist Around the World,” one of dozens of seminars, workshops and conferences held the second day of the June 15-22 congress.

It will be a long-term job to deepen the faith of Africa, “and see how it (faith) can be translated into local culture,” Cardinal Sarr said.

But he said the attendance rate at Mass in his country “is remarkable.” Senegal needs more parishes and churches to keep up with the growing number of Catholics, but the country only has limited resources, he explained.

“My heart aches when I travel to the West and see closed churches,” he said. “We (in Senegal) have to find a place to build new churches.”

In gratitude for the missionaries who came to Africa to spread the faith “it is time now for Africa to live out the Gospel and give it back,” said the cardinal.

Cardinal Ricardo Vidal of Cebu, Philippines, said the celebration of the Eucharist is “at times routine” and “Mass is used for political purposes” in his Asian island nation. More than 80 percent of the country’s 93 million people are Catholic.

Cardinal Vidal said that some people have Mass celebrated at their birthdays and other social celebrations as if “the Lord was an honored guest” and the Eucharist is detached.

Noting the fervent practice of the people who pack eucharistic adoration chapels, he said there is a dichotomy in their society, in which this faith life does not translate into social, political and economic life.

The lack of priests is part of the problem in the Philippines, he said, adding that churches and parishes are packed and some parishes in rural areas do not have a priest.

Meanwhile, Indian Cardinal Telesphore Toppo of Ranchi, president of the Catholic Bishops’ Conference of India, discussed the local cultures and several rites of the church in his country, where Christians are in the minority.

Despite small numbers, “the church is rich because of its so many different rites,” he said.

“The world can be enriched from the Eastern traditions,” he said.

The Mass in India “is colorful and a joyful Mass,” he said. “But deepening the religious life among the faithful is not finished.”

With the Eucharist, the church can evangelize, said Cardinal Toppo.