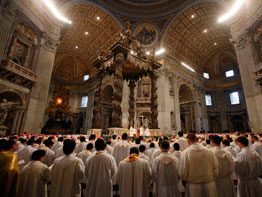 ROME – One’s feelings of hatred must be washed away with forgiveness and humble service toward others – they should never be left to linger long enough to poison the soul, Pope Benedict XVI said.

During his March 20 celebration of the Mass of the Lord’s Supper, which commemorated Jesus’ institution of the Eucharist, the pope reflected on the symbolic meaning of the ritual of the washing of the feet.

While the ritual symbolizes the call to imitate Christ by serving one another, it also means people must always and continually offer forgiveness, he said.

Through his passion and death on the cross, Jesus died for sins that are “infinitely greater than all the debts others may have with us,” the pope said in his homily at Rome’s Basilica of St. John Lateran.

Jesus’ parable of the unforgiving servant urges everyone “to not let rancor toward others become, deep down, a poison of the soul.”

Holy Thursday, he said, reminds the faithful “to continually purify our memory, sincerely forgive one another, wash the feet of one another,” to be able to gather around the Lord’s banquet.

The pope poured water from a golden pitcher onto the foot of each priest and then gently rubbed each foot dry with a dry white towel.

In his homily, the pope said confession and listening to God’s word are ways the faithful can purify their inner being.

He said, “Day after day, we are covered in filth of every form, empty words, prejudices, abridged and distorted wisdom; multiple forms of half-truths or blatant lies continually infiltrate our hearts.”

“All of this darkens and contaminates our soul, threatening us with the inability” to discern or strive for the truth and the good, he said.

In addition to the sacrament of reconciliation, God also cleanses his children and “makes us pure with his word and his love, through his giving of himself,” the pope said.

The faithful must welcome the word of Christ with an attitude of “meditation, prayer and faith” so that its healing powers “develop their purifying power in us,” said the pope.

Donations collected during the Mass were earmarked for La Edad de Oro orphanage in Havana, Cuba, where members of the Daughters of Charity care for people with disabilities.

Earlier in the day, Pope Benedict celebrated the chrism Mass in St. Peter’s Basilica, leading more than 1,500 priests and bishops in the renewal of their ordination promises.

He encouraged today’s priests to be honest, righteous and courageous in the face of evil, and at the humble service of God and all humanity.

The pope blessed the chrism and the oils used in the sacraments of baptism, confirmation, ordination and the anointing of the sick.

Deacons carried the oils in large silver urns to the main altar while catechumens, youths preparing for confirmation, the sick and deacons about to be ordained in the Diocese of Rome wheeled small tables carrying large, artistic urns called “anfore,” which also contained the sacramental oils.

In his homily, the pope reminded his audience of the vows many of them made when they embraced the priesthood: to stand before God and serve him.

A priest “must be a righteous, vigilant person, a person who is upstanding” in leading a holy and Christian life, he said.

But he must also be a servant, he added, and all he does must be carried out with that humble attitude.

During the celebration of the Eucharist, for example, the priest is “fulfilling a service to God and a service to all people,” he said.

Christ created an institution that entailed the giving of oneself even unto death for the good of all humanity, the pope said. Today’s priests must become part of this faith tradition based on such selfless service, he said.

“Humanity’s temptation is always wanting to be completely autonomous, to only follow one’s own desire, and to believe that only by doing so will we be free; that only through something akin to limitless freedom would man be fully man, would become divine,” he said.

But, the pope said, the truth is “we have to share our freedom with others and we can be free only in communion with them.” True freedom also comes about only when pursuing God’s will, he added.

While this kind of obedience to God is something expected of all people, it must be made even more concretely evident in the life of a priest, he said.

As priests, “we do not proclaim ourselves, but (God) and his word,” said the pope. “We do not invent the church in the way we would like it to be, but we proclaim the word of Christ in the right way, only in communion with his body.”

Priestly obedience means serving God and the church and that might mean having to go places or do things that were not part of one’s own plans, the pope said.

“This letting oneself be led when we do not desire is an essential part of our service and it is exactly this that makes us free,” he said.

By letting oneself be led by God and his will, “we experience something new – the richness of God’s love,” said the pope.

He said a priest also must be vigilant against “the persistent powers of evil.”

He must help the world always be on the lookout for God, he must be upstanding, hold firm against current trends, stand for the truth, and be dedicated in his commitment to the good, the pope said.

“The priest must be honest, bold and ready” to withstand insults and abuse for the Lord and be joyous in suffering dishonor for the sake of his name, Pope Benedict said.