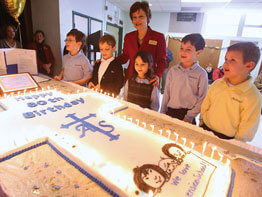 While Archdiocese of Baltimore officials discuss the future of Catholic schools, Church of The Ascension in Halethorpe believes its 80-year-old educational institution is vital to the community’s future.

Sandwiched in-between homes in the small, tight-knit community, the 170-student school has been trying to combat declining attendance with recent technological improvements, which have been spurred by first-year principal Virginia Bahr.

“I’m only one person,” Ms. Bahr said. “I can’t ensure anything. I can just do my job. I think what’s come out of this is that the community really supports this school and really wants this school.”

Ms. Bahr said an Open House held throughout the morning attracted a solid number of interested families. A parishioner also sang a song dedicated to the school, while a student told those at the Mass about the benefits of her education.

Father John A Williamson, also in his first year as pastor of the parish, said he has looked to connect spiritually with the youths of the parish. He re-launched a youth group there and encouraged parishioners to rally around the students,

“The school is crucial,” Father Williamson said of the school. “People stay here, and generations have gone through the school. I think it’s important considering the renaissance that is going on here.”

School board chairman Steve Shemenski, class of 1981, currently has two children attending the school. He said the school must follow the lead of Archdiocesan officials and innovate in order to maintain relevance.

“I think it’s critical for the parish,” Mr. Shemenski said of the school. “It’s something we can show off to the community. This is what we’re doing with our children. This is how we’re raising them.”