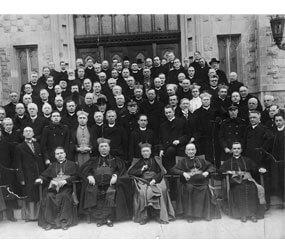 If there’s no celebration marking the second century of the church’s nationwide charitable network, it means the agency will have achieved the lofty goal of eradicating poverty in the United States.

The goal is no small task, acknowledged Father Snyder, the agency’s president, and Hill, senior vice president for public policy and government affairs, in an interview with Catholic News Service amid preparations for Catholic Charities’ 100th anniversary convention in Washington opening Sept. 25.

But they believe the goal can be met with plenty of hard work and a “sea change” in the country’s attitude toward the poor.

“What we have to do now is show people it’s not only in our moral best interest as a country, it’s also in our economic best interest to reduce poverty and have people be contributing citizens rather than be citizens who rely on others for help,” Father Snyder said.

As Catholic Charities concludes a year of activities for the anniversary with its four-day centennial gathering, the agency is planning new approaches to tackling poverty, an undertaking it considers to be among the most important to the country’s future.

The effort includes drafting what Hill called “transformational” legislation to address modern-day poverty. The bill, which Hill expected to be introduced in Congress with bipartisan support in mid-September, is one of series of initiatives related to Catholic Charities’ Campaign to Reduce Poverty.

Opened in 2007, the campaign’s goal is to cut the number of people living in poverty in half by 2020 through significant improvements in programs related to hunger, health care, housing, economic security, education and employment.

Father Snyder acknowledged the current economic recession, the deepest since the Great Depression, has hampered progress toward the goal. Months after the campaign was introduced the current economic recession hit, pushing the number of people living in poverty from 37.2 million in 2007 to 39.8 million in 2008, the most recent year for which U.S. Census Bureau statistics are available.

Still, the bigger challenge, as Father Snyder sees it, is creating the political will to make poverty reduction a priority.

“One of the big obstacles that we have in promoting poverty reduction is that there are a lot of people who have a stake in making sure that that industry will continue. It’s really a matter of saying we cannot support all of these pieces that simply continue that,” Father Snyder told CNS.

“We’re saying right now the system needs attention. We really have to find a new way,” he said.

As Catholic Charities’ chief legislative advocate, Hill expects to face tough questions and even criticism about the proposed bill from doubtful legislators.

“When we’re on the Hill, to be honest, we have those who believe that poverty is a result of a person’s individual failure,” she explained. “But (poverty) is really the result of the economy that we have.”

The legislation being proposed has three objectives:

– Change the way public assistance programs operate by looking at the economics of poverty while providing incentives for people to escape poverty and for the business community and social service agencies to help people rise out of poverty.

– Develop results-oriented programs so that success is measured by how well people fare as they move out of poverty rather than using statistical measurements of how many people are – or are not – receiving assistance.

– Focus on individuals and their specific needs rather than taking a one-program-fits-all approach or sending people to multiple locations for assistance.

The proposal incorporates suggestions and ideas collected in meetings with Catholic Charities partners, including program participants, Hill said. She and other agency officials traveled the country for a year to hear how well public assistance and social service programs work – or don’t work.

“What we’re going to bring (to Congress) is a holistic approach built on what an individual needs to the national conversation, and look at ways to empower and support people, building on their assets to move them up and not wait until they fall into a safety net,” Hill explained.

“What we’ve learned across the country is no surprise: access to a good education and access to a job that pays good wages is the easiest route out of poverty,” she said.

“We want to promote new policy concepts that highly value innovation and experimentation so that we measure the best, understand our successes, learn from our failures and scale programs accordingly,” she said.

Such legislative advocacy represents the kind of work Catholic Charities has readily undertaken since the early days of the National Conference of Catholic Charities. Convened in 1910 by Bishop Thomas Shahan, rector at The Catholic University of America at the time, the initial meeting allowed clergy and early 20th century social workers to see the similarity of their work and begin to professionalize, coordinate and consolidate services.

Catholic Charities is banking on its long-standing reputation as an advocate for the poor and a convener of diverse voices to convince lawmakers and policy analysts that what the agency is espousing makes sense.

“We cannot afford to do these (public) services the way we’re doing them now,” Hill said. “This idea of how we count success by how many meals (we serve) or how many beds (we fill) is counterintuitive to reducing poverty.

“The success for the next century for our work is in fact to reduce those numbers served to zero and obviously end the kinds of services we do today.”

More information about Catholic Charities USA programs can be found online at www.catholiccharitiesusa.org.