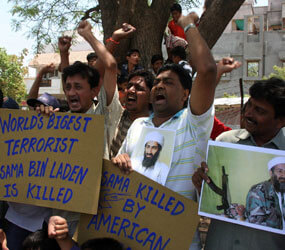 LAHORE, Pakistan – A retired archbishop said Pakistani Christians could suffer a backlash after the death of 9/11 mastermind Osama bin Laden, but it also might return balance to the nation.

In India and Philippines, Catholic leaders also warned of backlash.

“We are a soft target as they cannot attack America,” said retired Archbishop Lawrence Saldanha of Lahore. He told the Asian church news agency UCA News that, despite the risk of short-term retaliation against Christians, bin Laden’s killing could return balance to Pakistan’s society.

He said he hoped the killing of world’s most-wanted terrorist would reduce the militant radicalism that has engulfed Pakistan in recent years.

“At last we have hope that things will get better gradually,” he said.

“Many looked on bin Laden as a hero of the Islamic revolution, but he was a role model of extremism and a threat to world peace. His death will change the complexion” of the country, the archbishop said.

U.S. forces killed bin Laden, the founder of al-Qaida, in Abbottabad in northern Khyber Pakhtunkhwa province after a brief firefight. U.S. President Barack Obama said the forces had been acting on intelligence originally received last August and had acted in cooperation with Pakistani security authorities.

Saudi Arabian-born bin Laden ordered the 9/11 attacks that killed more than 3,000 people in the United States.

Archbishop Saldanha was ordained archbishop on the day of the attacks.

“The post-9/11 events affected my whole episcopal career and life,” he said, adding that the situation changed for Christians who were badly affected by violence and bloodshed. I saw it growing worse,” he said.

In India, Father Babu Joseph, spokesman for the Catholic Bishops’ Conference of India, prayed the al-Qaida leader’s death would not lead to retaliatory attacks.

“The church never endorses violence or associates with violence,” he added. “Violence perpetrated by religion is never acceptable to any civilized society.”

“No killing is welcomed. A criminal should be brought to trials and be duly prosecuted,” said Bishop Bejoy D’Cruze of Khulna. “I don’t know if bin Laden or al-Qaida had any connection with Bangladeshi militants or not. But it’s sure they were encouraged and inspired by his activities, which will decline, I believe.”

In the Philippines, Catholic Church leaders advised the government to prepare for possible retaliation from bin Laden loyalists.

“His followers in different places might retaliate because of what happened to him,” said Bishop Deogracias Iniguez of Kalookan.

“The death of bin Laden is good (in the fight against terror). But it is also bad because his loyalists will retaliate not only against the military and police but against innocent civilians,” Bishop Gutierrez said.

In Basilan province, where al-Qaida-inspired Abu Sayyaf Islamic militant forces have camps and have frequently attacked Christian communities, Bishop Martin Jumoad of Isabela said the terrorist’s death was a “triumph of good over evil.”

He said he hoped it would “weaken the Abu Sayyaf group here in Basilan because Abu Sayyaf leaders have been claiming they are being supported by al-Qaida.”