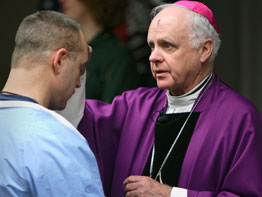 Though weekday Mass is not a typical part of Mary Anne Perry Zenger’s schedule, the Cathedral of Mary Our Queen, Homeland, parishioner will attend the Feb. 6 Ash Wednesday service at her church in order to receive ashes and inaugurate the season of Lent.

Though Ash Wednesday is not a holy day of obligation, Catholics traditionally flock to their churches, said Father Peter Lyons, T.O.R., pastor of St. Ann and St. Wenceslaus, in Baltimore.

“We have more people who go to church on Ash Wednesday than go on official holy days of obligation,” Father Lyons said. “The parishioners have made it a holy day of obligation for themselves, even though they are not obligated by the church. They have a deep hunger to come in for the season on a day of prayer and penance.”

Lent formally concludes the morning of Holy Thursday (March 20 this year), and there are no official holy days of obligation during this traditional sacred season, except Sundays, Father Lyons said.

The ashes that will be imposed on the forehead of Ms. Zenger of Roland Park will come from the burned remains of palms from the previous Palm Sunday, which is tradition in the Catholic faith.

Since ashes are a symbol of death, the cinders remind Catholics of the demise Jesus suffered on the cross, Father Lyons said.

“It’s an outward sign of someone’s desire to get into the spirit of the season,” he said. “As Catholics, we make a big deal of visible signs.”

This Lent, Lutherville resident Ellen Perry will once again focus on being less “short” with her three children.

“Hopefully, I’ve gotten better at it over the years,” said Ms. Perry, a parishioner of the Catholic Community of St. Francis Xavier, Hunt Valley. “It’s like a New Year’s resolution. It’s a concrete reminder of my commitment to my faith.”

Ms. Zenger has been teaching her 7-year-old son Jack this practice since he was a toddler and was so proud last year when the School of the Cathedral of Mary Our Queen student volunteered – without prompting – to give up his beloved chewing gum for Lent.

“You know, he stuck to that promise too,” she said. “In a day and time when children have so much and are rarely called on to sacrifice anything, I was over the moon with pride when my son wanted to surrender something he loves and understood why it was important.”

It’s a custom that grows out of the Gospel of St. Matthew, which says Jesus instructs his followers to practice prayer, fasting and almsgiving, which is usually translated to works of charity, mercy or acts of sacrifice, Father Lyons said.

Though this custom isn’t required during Lent, Catholics are mandated to make other sacrifices during the season, he said.