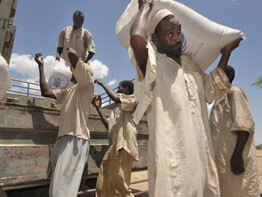 N’DJAMENA, Chad – As rebel troops raced across the desert in what some fear might be a repeat of February’s assault on the Chadian capital, aid workers prepared for the worst.

“We don’t want to wait until the last minute,” he said June 16. CRS was planning a joint convoy of vehicles across the border with CARE, another humanitarian agency.

Chadian rebels attacked N’Djamena, the oil-rich nation’s capital, during a February assault that resulted in hundreds of deaths and widespread damage. The CRS office in the city was hit by a rocket-propelled grenade, although Fall suggested the government soldiers who fired it probably were aiming at a nearby radio station that had been seized by rebels.

The aid agency office, abandoned by CRS staff as fighting raged on the streets outside, also was looted by local residents. The agency lost two vehicles and several computers. Four months later, the office still does not have enough chairs, leaving staff members to carry their own chairs to meetings in other rooms.

During the February battle the displaced CRS staff did not lack for work across the border in Cameroon, where they took refuge. They worked with Cameroon’s Catholic Church for three weeks, providing emergency shelter and food to many of the 30,000 Chadians who also fled across the border to escape the fighting.

“We’re ready to do the same thing again if the rebels come back to N’Djamena,” Mr. Fall, a Senegalese citizen, told Catholic News Service.

CRS has worked in Chad since 1985, beginning as an outreach of the agency’s office in Cameroon. Since 2007, it has been a separate operation, providing support to a Chadian Catholic agency that works in three refugee camps in the country’s east.

Chad hosts a quarter-million refugees from the neighboring Darfur region of Sudan, and almost 200,000 Chadians have been internally displaced by a complex interplay of conflict as internal disputes have mixed with spillover violence from Darfur. In addition, more than 50,000 refugees fleeing chaos and war in the neighboring Central African Republic have crossed into southern Chad.

In March, a European Union military contingent began deploying in Chad and in the Central African Republic. Charged with protecting refugees and internally displaced people, the force – known as EUFOR – came under fire for the first time June 14 when Irish troops engaged in a brief firefight near the Chadian town of Goz Beida.

EUFOR, which is supposed to have 3,700 troops by the end of June, also has a mandate to protect humanitarian workers. CRS officials are skeptical, however, that the troops can make much of a difference.

“They are just hanging around, drinking beers and spending their per diem. Maybe their presence will intimidate the rebels, but people aren’t expecting anything very serious from them,” Fall said.

The military approach of the European contingent is not appropriate for the situation on the ground, said Cristophe Droeven, the CRS country representative to Chad.

“Security is the main problem we and our partners face in the field. People think that what is adversely affecting our work in eastern Chad is the war between the national army and the rebels, but that’s not true. It’s banditry that’s affecting our work,” Mr. Droeven said.

“In my time here, I’ve never seen (nongovernmental organizations) targeted directly by the army or the rebels. They fight each other, but we are not a target for them. We are a target for bandits. The carjackings and attacks on agency compounds are a daily problem and they are slowing down our efforts to help the displaced, refugees and other poor people in the region,” Mr. Droeven said.