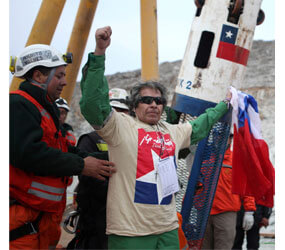 SANTIAGO, Chile – As miners were pulled one-by-one from the tunnel in the San Jose mine in Copiapo, where they’d awaited rescue since Aug. 5, Chile’s churches were hosting round-the-clock vigils, special Masses appealing for the men’s safety and other prayers of thanksgiving.

At a Mass that began near midnight Oct. 13, as the first miner was being brought to the surface, Santiago Auxiliary Bishop Cristian Contreras Villarroel said the lives of the 33 miners should be seen as a sign of the need all people have for redemption.

“There is no saint without a past, nor sinner without a future,” he reminded the congregation in El Sagrario chapel next to Santiago’s Metropolitan Cathedral.

An elaborate capsule system was pulling the miners one at a time from the tunnel where they were trapped in a collapse of the mine. Family members, medical personnel, politicians, reporters and well-wishers were there to meet each man as he left the capsule that drew him to the surface.

Prayer vigils and eucharistic adoration were to continue in churches around Chile until the last miner was pulled from the tunnel, Chilean church leaders said.

“This is a propitious moment for the entire church to unite in faith and hope,” Bishop Alejandro Goic Karmelic of Rancagua, president of the Chilean bishops’ conference, told reporters Oct. 12.

Opening the Santiago Mass, Cardinal Francisco Errazuriz Ossa asked the people of Chile to be united in prayer with the 33 miners and their families, “imploring the Lord to bring all of them to the surface” without setbacks. He also prayed for all the men as “they will be starting a new life,” happy and with the full blessing of God.