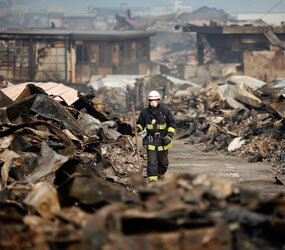 TOKYO – As the magnitude of the disaster in Japan unfolded, religious and humanitarian aid organizations stepped up efforts to provide assistance.

The earthquake was followed by tsunamis that wiped out entire cities and by fears of catastrophe at nuclear power stations damaged in the quake. Government officials estimated that tens of thousands of people lost their lives in the March 11 disasters.

The Diocese of Sendai includes the areas hardest-hit in the disaster, reported the Asian church news agency UCA News.

Father Peter Shiro Komatsu, diocesan chancellor, said March 14 that Bishop Martin Tetsuo Hiraga of Sendai was unharmed but had not received complete reports on the damage because telecommunications remained disrupted.

The priest said diocesan officials did not know about what had happened to several churches along the coast. He said one church in Fukushima was totally damaged and eight churches in Sendai were either unaffected or only slightly damaged.

The diocese said Father Andre Lachapelle of the Quebec Foreign Mission Society had died en route from Sendai to his church about nine miles away. There were conflicting reports of whether he suffered a heart attack or was lost in a tsunami.

Niigata Bishop Isao Kikuchi, president of Caritas Japan, said, “We have received so many e-mails from all continents, filled with words of compassion and prayer. We are very grateful for this solidarity. We believe that aid activity is needed, but prayer is also important in such a situation.”

Pope Benedict XVI was among those sending his prayers.

The U.S. bishops’ Catholic Relief Services was working with Caritas Japan. A CRS spokeswoman said her agency was ready to help in other Asian countries where it already worked.

In a statement, Caritas Japan said it would concentrate its efforts on meeting the needs of people with no access to public services and on the rehabilitation phase of recovery.

In Manila, Philippines, the leak of radioactivity and explosions at the damaged Fukushima nuclear power station prompted renewed calls for the government to abandon any plans to use nuclear energy for power generation in the Philippines.

Bishop Deogracias Iniguez, head of the public affairs committee of the Catholic Bishops’ Conference of the Philippines, said the church has been proven right in consistently opposing the revival of the nuclear facility.

“I think they should intently follow what is happening in Japan,” he told the Philippine bishops’ news agency. “We have long been opposing it due to its possible negative effects in the country.”

The Salesians, who lost 250 children and adults at one school during the January 2010 Haitian earthquake, reported that most of the order’s convents, schools and churches were south of Tokyo and incurred only minor damage. The Salesian news agency reported from Tokyo that there was no news from one house in Nojiri, in the quake zone.

The Sisters of Charity of Jesus reported all their sisters were safe, but the Salesian news agency said some students were missing from the nursery in Fukushima.

UCA News reported that Catholics in mainland China were among Asian Catholics who expressed solidarity with the earthquake victims in Japan and added prayers to their Masses March 13. Jinde Charities in northern China’s Hebei province also offered an initial $10,000 to support Caritas Japan’s relief efforts.