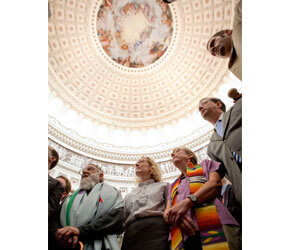 WASHINGTON – As U.S. lawmakers continued to wrangle over a decision on the nation’s debt ceiling and proposed budget cuts, representatives of faith groups held a protest on Capitol Hill and Catholic leaders urged lawmakers to remember the nation’s poor and vulnerable people.

During the protest, about a dozen people prayed publicly to ask the Obama administration and Congress “not to balance the budget on the backs of the poor,” according to a statement from the coalition that planned the action.

After they ignored warnings by U.S. Capitol Police to stop praying, they were arrested for demonstrating in the Capitol. Late in the day, the group was still being held, but a spokeswoman for the group expected them to be released within hours. Each person was expected to be fined $50.

Those arrested included the executive director of Faith in Public Life, the general secretary of the United Methodist Church and a past president of the National Council of Churches of Christ.

Daily prayer vigils led by a different religious organization each week have been taking place on the grounds of the United Methodist Building near the Capitol.

Meanwhile, the chairmen of two U.S. bishops’ committees reiterated their message to Congress, telling members of the U.S. House July 26 that they cannot ignore “the moral and human dimensions” of the ongoing debate.

The bishops wrote that every budget decision should be assessed by whether it protects human life and dignity, how it affects “the least of these,” including the hungry and homeless, and how well it reflects the shared responsibility of the government and other institutions to promote the common good of all, especially workers and families struggling in the current economy.

A group of Ohio Catholic priests, women religious, religious brothers and laypeople said in a letter July 27 to House Speaker John Boehner, a fellow Ohioan and Catholic, that “as one of the most powerful Catholics in Congress,” he was faced with “a monumental choice.”

“You can heed the consistent moral calls from Catholic leaders who have urged lawmakers to decrease our debt fairly and protect the most vulnerable, or you can yield to growing political pressure from Tea Party Republicans willing to accept catastrophic default for the first time in our nation’s history,” they said.

“This is a stark choice between responsible leadership that serves the common good and narrow ideology that makes tax cuts for the wealthy our most sacred national priority. … Now is the time to seek a compromise that reflects the Catholic values of solidarity with the most vulnerable and prudential judgment,” they added.

News reports said that Boehner has called on everyone in the House, including members of the Tea Party, to get behind his debt-ceiling plan even if it falls short of the spending cuts many of them want.