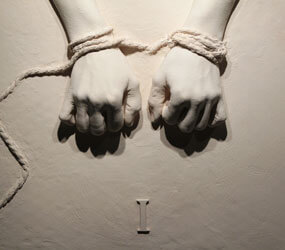 WASHINGTON – Pennsylvania artist Virginia Maksymowicz said she created her sculpted reliefs of the Stations of the Cross using real people as models because she wanted each Station to seem “more immediate” to viewers than be some abstract imagery they could easily dismiss.

“In most Roman Catholic churches, the Stations are up all the time and we sort of dismiss the imagery and don’t notice it anymore,” Maksymowicz said in a phone interview from Lancaster, Pa. “Some contemporary ones are simplified or abstract. However, I think you can make it more universal, more personal, by making it more particular with casting real people.”

Maksymowicz’s sculptures are on display in Washington at the Basilica of the National Shrine of the Immaculate Conception through April 25.

“The process that I use involves alginate and it picks up every pore and wrinkle; it makes it really real,” she told Catholic News Service.

At the beginning of the casting process, the part of the model that is needed for a particular Station, such as the hands or the feet or the face, is covered in alginate, a nontoxic, flexible mold-making material often used in dental applications. A secondary mold, called a “mother” or “shell,” is made of plaster-impregnated gauze and formed over the alginate.

“I didn’t want to go the (Mel) Gibson route and go gory,” she noted, referring to Gibson’s 2004 film “The Passion of the Christ,” criticized by some as being too violent and bloody.

“In an odd way, that turns people away. But having real people would make it more immediate.”

After the alginate and gauze molds are removed from the model, they must be reinforced with pottery plaster. Open ends are “dammed” with Plastilene, an oil-based clay, and a type of ultra-hard plaster called Hydro-Stone is added.

“There’s something about body casting that is so real. No matter how realistic a sculptor you are, it never allows the realism of being able to see pores and wrinkles. With casting, they can see for themselves,” Maksymowicz said.

The 14 Stations of the Cross, also called the Way of the Cross, are the chief scenes of Christ’s suffering and death. The Resurrection is sometimes included as the 15th one, though it is not traditionally part of the Stations.

Maksymowicz has exhibited her work in New York City, as well as in college, university and nonprofit galleries throughout the United States and abroad. She is a past recipient of a National Endowment for the Arts fellowship in sculpture and has other grants and well as several honors and awards.

Her sculptures on display at the national shrine are replicas of Stations she created a number years ago for St. Thomas Episcopal Church in Lancaster. The church commissioned the pieces.

“This is actually the first major commission that I have ever gotten. It was a dream commission. They were so open, the community at St. Thomas,” she said.

“St. Thomas had a competition and I won. The reason I applied was because it was socially concerned work that was also in line with Catholic doctrine,” she explained. “I teach at college in Lancaster and I made a proposal to do body casting and they loved it. They also agreed to allow me to make a second set of the Stations and that’s the set that I tour with.”

The immediate response to her work at St. Thomas was very positive. “The community loved it and it’s up right now in Lancaster. I’m delighted they allowed me to cast a second set,” she said.

Receiving the commission from St. Thomas was a delight for the veteran artist.

“I didn’t expect to go to college – there was no money in the family. But back then, college was free. My mom said, ‘Great! Wonderful, you can go to college!’ I decided I was going to study something I love. I love art.”

In 1973, she received a bachelor’s degree in fine arts from Brooklyn College of the City University of New York. In 1977, she earned a master’s of fine arts in visual arts from the University of California at San Diego.

Maksymowicz has been a visiting artist at the American Academy in Rome, an artist-in-residence at the Powel House Museum in Philadelphia, and a fellow at the Vermont Studio Center. She is currently an associate professor of art at Franklin & Marshall College in Lancaster.