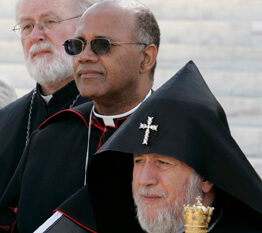 WASHINGTON – During Catholicos Karekin II’s visit to Washington Oct. 11, the wind whipping through the nation’s capital may have threatened to send hats and papers flying, but the commitment to religious freedom of interfaith leaders gathered with him at the Jefferson Memorial remained firmly grounded.

Standing in front of the memorial, the Armenian Apostolic Church’s reigning patriarch since 1999 and an assemblage of U.S. religious leaders gave tribute both to freedom of religious expression and to Thomas Jefferson, hailed as the United States’ guarantor of constitutional religious freedom for promoting the separation of church and state.

“I like the dreams of the future better than the history of the past,” said Catholicos Karekin, quoting Jefferson through an interpreter.

Speaking for himself, he added that in guaranteeing religious freedom, “we do not reduce the rights of the one, or the established.”

He added there were 60 different “legally registered” religious groups now in Armenia, 95 percent of whose population are adherents of the Armenian Apostolic Church, which is an ancient and independent Oriental Orthodox church.

Catholicos Karekin had a White House visit scheduled shortly after the welcoming ceremony at the Jefferson Memorial.

A letter of welcome from Archbishop Donald W. Wuerl of Washington, read by Washington Auxiliary Bishop Martin D. Holley, expressed the archbishop’s “spiritual solidarity” with Catholicos Karekin, who met with Pope John Paul II in 2001 when the pope visited Armenia.

Americans, Archbishop Wuerl said, are “a people who recognize the sovereignty of God and God’s law in our personal and communal life.”

Archbishop Wuerl noted the “Catholic colony” of Maryland was created in 1634, and that it became “the first state to grant religious freedom to all its inhabitants.”

Rabbi David Saperstein, head of the Religious Action Center for Reform Judaism, took on a personal tone, recalling how Armenian-Jewish relations were fostered in his boyhood neighborhood by an Armenian family that lived near his home.

While he confessed that as a youngster he would hang out in the Armenian family’s kitchen in hopes of getting some tasty treats, the father of the family showed “a respect for a 10-year-old’s thoughts that was rare,” he said.

“Armenians must be the 10 lost tribes of Israel,” Rabbi Saperstein remembered the father saying once. “We are a people small in number who love culture and art and excel in them. … We excel in education. … We embrace within our religious traditions the important freedoms that America has given us.”

Rajwant Singh, president of the Sikh Council on Religion and Education, noted how the Armenian penchant for religious freedom for those of other faiths is replicated in the Eastern religious tradition. “Religious freedom automatically allows religious diversity,” Singh said, adding that since the first U.S. Sikh temple was build in 1914 more than 200 have been established.

Alluding to his canary-yellow turban, Singh said, “Every day I am challenged.” Turban-wearing U.S. Sikhs often face scorn and derision and often are mistaken for Muslims in the aftermath of the Sept. 11, 2001, attacks carried out by terrorists from Middle Eastern countries.

Still, he said, “I am able to wear my religious identity with pride, and still call myself an American … and that is only possible thanks to the vision of Thomas Jefferson.”

Sayyid M. Syeed, representing the Islamic Society of North America, quoted Jefferson as saying that America welcomes the practitioners of all manner of religious belief as well as “the infidels in its dominion.”

Maureen Shea, representing the Episcopal Church in America, praised what has been nearly a century of Episcopal-Armenian collaboration. She identified Jefferson as an Episcopalian, adding that “like many, though, he had some disagreements with his church.”